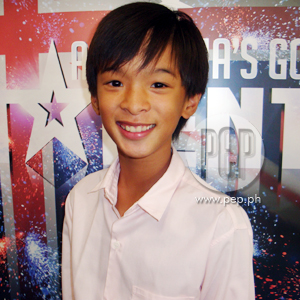 Twelve-year-old Jal Joshua Lebumfacil from Cebu impressed the judges and the Australian audience during his three separate performances in the talent show Australia's Got Talent.

A few days ago, another Filipino talent stole the spotlight—12-year-old Jal Joshua Lebumfacil.

Jal Joshua made it from his audition up to the grand finals where he sang Barry Manilow's "One Voice." While the judges and the audience liked his performance very much, the viewers' votes favored 15-year-old Australian opera singer Mark Vincent who also received a standing ovation from the audience and good reviews from the judges for his performance of Amaury Vicceli's version of Leonard Cohen's "Hallelujah." Mark became the Australia's Got Talent season 3 champion while Jal Joshua came in second.

With the help of his mother, Jocelyn Lebumfacil, PEP (Philippine Entertainment Portal) got the chance to interview Jal Joshua to know more about him and his experience in wowing the Australians in Australia's Got Talent.

PEP: From where do the Lebumfacils hail?

PEP: When did you and your family migrate to Australia?

Jal Joshua: We migrated last March 2008. My mother Jocelyn, who used to work with Atlas Fertilizer Corporation in Toledo City, applied for a Permanent Resident Visa under the Independent Skilled Migration for Accountants.

PEP: We noticed in the videos that you already have that Australian twang and accent, so we take it you easily blended in with the locals (Australians, Fil-Australians and other races there) after you arrived from the Philippines. It looks like you did not have a hard time adjusting there.

Jal Joshua: It was hard at first for me because I missed my schoolmates and friends at De la Salle-ASMC in Toledo City, and my cousins, too. Their [Australians'] accent is also different from ours, but I soon managed to adjust to it because I got lots of Australian friends in school. Australians are very friendly, too.

PEP: What were the contests you joined and won?

PEP: What or who made you join Australia's Got Talent?

Jal Joshua: I was the one who was interested to join Australia's Got Talent and my parents just helped me to get the required application forms. I watched the previous episode of AGT and I liked it. I always loved to perform in front of the public.

PEP: Tell us what it's like standing onstage and performing in Australia's Got Talent?

Jal Joshua: At first I felt a bit nervous but once I was on stage, I managed to overcome my fear. I just had fun and performed the best that I could.

PEP: We saw how the judges and the studio audience loved your performances. How come you didn't win? Were you disappointed?

Jal Joshua: It is based on the public's vote, so, maybe, my total number of votes was lower than that of Mark Vincent, the winner. I am already happy and contented on being in the top 2 and I think being in the finals is just an incredible experience for me. All the finalists were really good talents and anyone of them deserved to win.

PEP: Did you think your being a Filipino contributed to your not winning the contest?

Jal Joshua: I don't think so. I don't believe there are many racists in this place. Being in the top 2, I'm sure Australia liked my performance, too. It's just that only one should come out the winner.

PEP: Did you expect to be this popular when you joined the AGT?

Jal Joshua: No, it is hard to expect too much. Let's just leave everything to God. Whatever He wills for me, let it be.

PEP: What is your reaction to those who have positive comments on your YouTube videos, especially your grand-finals performance?

Jal Joshua: It is just amazing and I am glad that many people love my rendition.


PEP: Do you know about Charice Pempengco, Charlie Green, Arnel Pineda and Moymoy Palaboy? They are Filipino YouTube sensations like you, too. What can you say about them?

Jal Joshua: Yes, I know and I like them. They are all great singers and how I wish that one day, I could be like them.

PEP: So what's going to happen now after AGT?

PEP: Do you have plans of returning to the Philippines to start a career?

Jal Joshua: I don't have any plans to return to the Philippines, at the moment. I am still young and I want to focus on my education first. But who knows what the future offers for me?

PEP: What is your message to the Filipinos?

Jal Joshua: I would like to say thank you for all those who appreciated my talent. I know I still need a lot of training, but I will try my best to develop this God-given talent. For those who have the potential in singing, don't be afraid to show and share your talent.