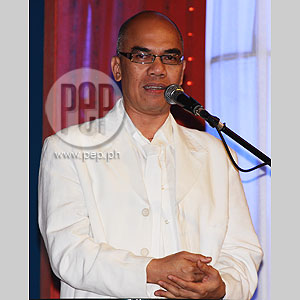 Showbiz talk-show host Boy Abunda relates how he feels for his co-host Kris Aquino, who was disappointed about the spontaneous interview of the newly-engaged couple Sen. Mar Roxas and Korina Sanchez in the noontime show Wowowee last April 25. Kris said that she was promised an exclusive sit-down interview with the couple for the late-night showbiz program Showbiz News Ngayon.

Last Saturday, April 25, TV personality Korina Sanchez was invited as Willie Revillame's guest co-host for the "Willie of Fortune" segment in Wowowee. After the segment, Willie sang a song for Korina and when it ended, she was surprised by Sen. Mar Roxas's presence. Willie took this opportunity to ask the newly-engaged couple about the details of their engagement.

The incident disappointed Kris Aquino a bit because she had been promised a first exclusive interview with the couple for her late-night showbiz program with Boy Abunda, Showbiz New Ngayon.

Although she understands the situation of Korina and Mar at that time, Kris couldn't hide how she felt when she found out about the impromptu interview in Wowowee. She said in an interview with ABS-CBN's website, "Ayaw ko ng negative na ano, siyempre for ano, kasi in fairness talaga, I mean,iba talaga yung bonding namin ni Korina. Pero yun nga, kung family at iba yungbonding, they forgot about me."

"Alam ko si Kris napahiya sa akin because it was not promised to me, it was promised to Kris. And it had nothing to do with Willie because that's not a problem to us. I mean, he's a friend, he's good friend of ours. And I think Wowowee is really on top of the game, it's doing very well, so it had nothing to do with it. I felt bad for her, pero maaayos 'yon. I felt bad for her."

He added that he empathized with Kris when she was teary-eyed as she explained the issue to some members of the media.

Boy said, "Naiintidihan ko 'yon dahil ang exclusives ay buhay natin, e. Di ba, buhay namin 'yon? And that was a very important story for Kris. Second level, I have supported Manny Villar from the time he was in Congress up to the time he last run for the Senate until he became Senate President.

"Mahalaga kay Kris na makita ko kung bakit sinusuportahan niya si Mar. Isa yun, that was on a personal level. With that exclusive interview, she was hoping that I would see her point as to why she was supporting Mar, so double whammy para sa kanya.

"Pero ang pinakamahalaga niyan, all of us die for an exclusive. Sabihin man natin na it's just a story, lahat nagdadaan, but an exclusive is an exclusive."

UNDERSTANDING MAR AND KORINA. A week after the interview with Sen. Roxas and Korina in Wowowee, Boy said that he's slowly understanding the couple's explanation.

The TV personality also mentioned how Mar and Korina apologized to him and Kris.

He related, "In fairness to Korina and Mar, they've been communicating with me and Kris, they've been writing notes, they've been sending presents. Wala ka naming masasabi. They've been showing talaga how they were, that they displeased that things had to happen that way, because biktima din sila ng circumstance. I mean, I'm quoting Korina, they were 'victims of circumstance.'

PEP asked Boy if there would still be a sit-down interview with Sen. Roxas and Korina in SNN. He simply replied, "Hindi ko alam. But, may imposible ba rito sa mundo ng pag-ibig na ito?"