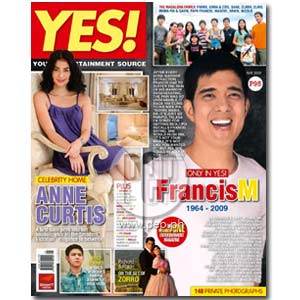 The May 2009 issue of YES! magazine featuring Francis M on the cover.

This May, YES! magazine bids farewell to one of the biggest influences in OPM, Francis Magalona. While Francis may have succumbed to his battle against leukemia, his spirit lives on as YES! gives an exclusive look into Francis’ childhood, the beginnings of his love for the arts, and his undying devotion to his wife Pia and their eight children.

Francis broke into public consciousness when he was launched in the highly-successful '80s classic Bagets 2, but his movie career was plagued with frustrations. Pia tells YES!, “During that time, uso no’n ‘yong freezing of contracts. So they froze him. He couldn’t do movies for other people, but they don’t wanna give him naman projects. So, parang nawalan siya ng gana.”

This led him back to his first love—hip-hop. Francis would write down rhymes and practice them in front of his family, and Pia says, “We’d even go to Subic, and he’d practice his microphone skills there.” Upon discovering the U.S. military bases there, Francis would frequently hit the bars in town and search for people to engage in a freestyle battle of improvised rapping. “My siblings would make fun of him and say ‘What’s that? That’s just noise.’ E ako, sobrang bilib ako, aliw na aliw ako,” Pia tells YES!. “So totally, ine-encourage ko talaga siya na gawin ‘yon."

With Pia’s encouragement and Francis’ growing frustration about what was going on in the country at the time –Pia says, “He was parang naiinis na everybody wants a handout and he’d say “All they want to do is sit there and then they want the government to provide for everything for them. E, I want to tell them that they’re lazy!’”—his first single “Mga Kababayan Ko” was born.

Francis’ brother-in-law Mike Arroyo (not the First Gentleman) says, “Before, everyone was telling him, ‘Mga Kababayan Ko’—baduy ‘yan. Pero naging number one hit across the land! Talagang it was a phenomenon, di ba? It became almost like an anthem.”

YES! devotes almost 30 pages to Francis M, featuring 148 private photographs from Francis’ personal albums, and the photographs that detail his battle with leukemia and the outpouring of love and support from his family and friends upon his death.

The May issue of YES! magazine is now available in newsstands, bookstores, and supermarkets nationwide.