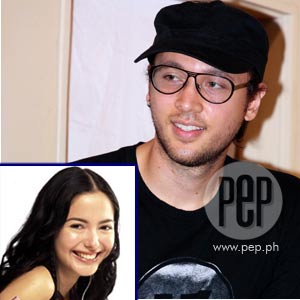 Aside from the main cast of the upcoming ABS-CBN weekly program Your Song Presents: Boystown—which features the Gigger Boys of ASAP '09—its director, Lino Cayetano, also became the favorite interviewee of the entertainment press during the show's presscon last night, May 5, held at the Party Venue in Scout Tuason, Quezon City.

Direk Lino was immediately approached by the media and asked about his new non-showbiz girlfriend named Jennifer Rockett. However, like the usual Direk Lino, he was tight-lipped on all the questions pertaining to his 24-year-old Fil-Australian girlfriend, whom he met during his one-year stay in New York.

Instead, he just said that Jennifer used to be a commercial model here in the Philippines. She became an image model for the skin-whitening product Skin White. Now, she's based in New York where she works as a photojournalist and an employee in the United Nations.

The younger brother of Senator Pia Cayetano was also mum when asked about the local celebrities who were linked to him, his former girlfriends Bianca Gonzalez and KC Concepcion.

His short statement when asked if he's okay with these ladies: "I'm friends naman with everyone naman. With everyone, we're okay naman, wala kaming problema. I'm happy for everyone."

When the media pressed about his past and current lovelife, Direk Lino smiled and said: "Hindi ba natin puwedeng pag-usapan ang Boystown?"

THE SELF-HIATUS. The 31-year-old director also clarified that he did not leave showbiz because of the past issue with KC.

He explained, "I left really to study. Ngayon, I'm happy kasi I just got back, siguro hindi tumagal ng two weeks nang dumating ako when I was given the chance to do Boystown.'

Lino said that he wanted to take a break from directing because, "I think it helps me in my work, it inspires me."

Direk Lino's last project was the first solo movie of Kim Chiu and Gerald Anderson as a love team, titled I've Fallen for You in 2007. He also directed an episode of the weekly drama Maalaala Mo Kaya, "Basilica del Minore Sto. Nino de Cebu," before he left for the States.

Although he admitted to PEP (Philippine Entertainment Portal) that he missed directing movies and TV shows, Direk Lino reiterated that a short break really gives him time to do other things.

Now that he's back, Direk Lino said that he may stay for two to three years before he goes back to school.

He added that he's just happy that he was offered to direct Boystown, which will premiere this Sunday, May 10, after ASAP '09. This will feature the all-male dancing group Giggers, which is composed of Enchong Dee, Robi Domingo, Sam Concepcion, Dino Imperial, Chris Gutierrez, AJ Perez, and Aaron Villaflor.