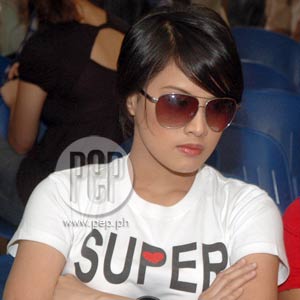 Delara vocalist and Eat Bulaga! co-host Lougee Basabas is leading in the online poll for the annual "World's Sexiest Vegetarian."

PETA (People for Ethical Treatment of Animals) is a non-profit organization that aims to protect the rights of all animals. It advocates boycotting meat and going vegetarian by launching ads with taglines such as "Try to relate to who is on your plate" and "Baka kinatay. Baka kinain. Kinain mo ba ito? Investigate Vegetarianism."

Jason Baker, PETA Asia-Pacific director reveals the biggest perk of going vegetarian. "When you look at the more than 200 gorgeous celebrities in this year's poll, it's clear that there can be no bones about it—a vegetarian diet makes you beautiful, inside and out."

He adds that not only does going vegetarian make you more stunning; it makes you feel better about the Earth.

"After all, going vegetarian is the best thing that you can do for animals, the Earth, and yourself. Plus, everyone knows that there's nothing sexier than a person who exudes both passion and compassion."

For more information and to cast your vote, please visit PETAAsiaPacific.com. The poll runs until May 29.