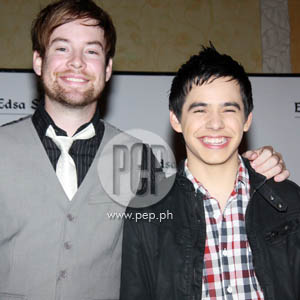 David Cook (left) and David Archuleta (right) answered questions from the local press during the grand press conference for their upcoming concert at the SM Mall of Asia Concert Grounds.

American Idol Season 7 winner David Cook and runner-up David Archuleta faced the local press in a press conference held earlier tonight, May 14, at the Isla Ballroom of Edsa Shangri-la Hotel in Mandaluyong City. This was in connection with their much-awaited back-to-back concert, which will be held on May 16, Saturday, at SM Mall of Asia Concert Grounds.

The two Davids answered questions thrown at them by the press, including PEP (Philippine Entertainment Portal)—from their Idol journey, to Filipino delicacies (Cook wants to try to eat balut; Archuleta just loves Philippine mangoes, especially the dried ones), to sneaking into a local mall (Shangri-La) and being followed by more than a hundred people, the outpouring love that they get from Filipinos, and many others.

Even though David Cook is older than David Archuleta—Cook is 26 and Archuleta has just turned 18—the two American Idol sensations are actually very good friends, as we saw when they were comfortably making fun of each other. They were also very generous in exchanging compliments. When Cook said that Archuleta is "cooler" than himself, the younger David promptly countered that between the two of them, it's very easy to tell that the older David is the "cool one."

The audio pick-up inside the venue was so bad that we could hardly discern what the two Davids were saying in our digital recorder. But we are trying our darn best to move heaven and earth to bring to you a more detailed story. Hopefully, we will be able to post that story tomorrow, May 15.

In the meantime, feast on this photo of the two Davids who certainly took Manila by storm.

Prior to the press conference, David Archuleta guested live on SiS and Eat Bulaga!, where he was greeted by throngs of fans. David Cook, on the other hand, made a public appearance at The Block in SM North Edsa, where he was also welcomed by hundreds of shrieking fans.

After the presscon, the two Davids dropped by at the victory party of Filipino boxing great, Manny Pacquiao.

Tomorrow, May 15, it will be David Cook's turn to guest live on Eat Bulaga!.