Dingdong Dantes: "Drama is the hardest thing to do for an actor" 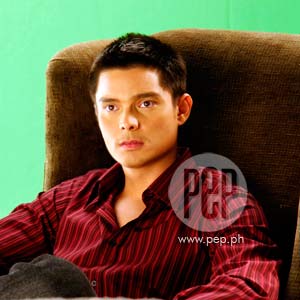 Whenever the scene requires him to cry, what sad thought does he bring up? He paused for a few seconds before saying, "It's a trade secret, and something I cannot reveal because, you know, it's classified. Hindi...hindi talaga, dahil marami yun, e, marami."

Viewers did a double take when Dingdong Dantes emerged on our TV screens as Sergio Santibañez. Remember that scene when his character in Marimar was introduced?

He was driving a top-down sports car, and the ladies who were able to catch a glimpse of him fainted. Some found it nakakakilig; others said it was almost ridiculous. But Dingdong surely made an impression.

From his warrior roles in Encantadia (2005) and Atlantika (2006), the former teen star transformed into a dashing debonair—so lean, tanned, and oh, swoon-worthy.

It was not just his good looks that made TV viewers everywhere take a second look. The 28-year-old actor did prepare himself for the role, and his efforts paid off—he became the more popular Sergio.

No looking back since then. He graduated from teenybopper roles and started establishing himself as an actor.

Drama was not the path he envisioned though, so when PEP (Philippine Entertainment Portal) asked for his reaction about being groomed as a dramatic actor, Dingdong said he was quite diffident about it.

He said, "Hay, naku, a lot of fear...A lot of fear because I've always considered drama as the hardest thing to do for an actor."

GMA-7 recently announced that he would portray the intensely passionate character of Cholo in Stairway to Heaven. He has not read the script. He has not seen a single episode of the said Korean series. "Sa totoo lang hindi ko pa alam," he said.

Nevertheless, he was brimming with excitement. "That is what is I will work on, from the day onwards," Dingdong added.

And so, before he'd get too busy with his upcoming television project, we had a "drama-full" question-and-answer session with him.

Q: Who's your drama teacher?

A: Experience. First, experience what the scene is about. Kung nangyari, if there's a scene, kung dapat, in one way or another, na-experience mo yun sa buhay mo, for you to be able to really...to feel and know how to feel.

Q: How do you pepare for a role?

Q: What makes you cry, and how?

But he clarified, "Hindi ako iyakin as a person."

Q: What's your most dramatic moment?

(He was referring to that heart wrenching scene in Marimar when Bella Aldama fainted in front of his car.)

Q: Why was his monologue cut?

Q: How do you pull yourself back from reel to real world?

A: Yun ang challenge about acting: to shut down this reel from what is real. Pero I admit there are times na nako-crossover mo yun. Nadadala mo. So, wala, e, we're only human. Minsan nagkakamali ka rin.

It will be recalled that most of his previous girlfriends, Antoinette Taus and Karylle, were his screen partners.

Q: But if you don't fall in love with your leading lady, will that make you less effective as an actor?

A: Moments of Love with Iza Calzado and Karylle.

Q: What about your favorite character?

Q: Who are your favorite Hollywood and local actors?

Q: What about actresses?

A: Kate Winslet. Sa local, ang dami, e. I can't name names, but off the top of my head, Cherry Pie Picache...

A: Manila by Night.

We were unsuccessful in determining the title of the movie he was describing. But the closest that came to mind was Dahas, which was topbilled by Maricel Soriano, and not Vilma Santos.

Q: If there's a film you would want to have a television remake, what would it be?

Q: Are you ready for an acting award?

A: I'm sure halos lahat naman ng artista, gustong magkaroon ng recognition na gano'n," he began. "Pero more than that, it's [already] a privilege that the role was given to me...Yun pa lang masaya na ako.

Q: Be that as it may, when do you see yourself receiving an award?

Q: Are you okay with being a drama actor?

A: Sa ngayon, okay sa akin na nandito ako. And like what you said, puwede nating itawid at ibalik yung mga mas maraming ganoong klaseng materyales. Siguro it's good to start somewhere. This project [Stairway to Heaven] is a good start for more like that to come.

Q: Who's your most favorite leading lady?

We asked again, why?

Q: Isn't he scared that breaking his tandem with Marian Rivera may prove to be not a good career move?

Q: Lastly, aren't you nervous about this project which will catapult you to ultimate leading-man status?

A: I believe in the project. It depends on how it's executed. Very optimistic naman ako. May tiwala naman ako sa sarili ko, e. So with the help of many people and others, I believe I can.

Ladies and gentlemen, make way for this guy whom you will surely include in your Drama Watch List, Dingdong Dantes!