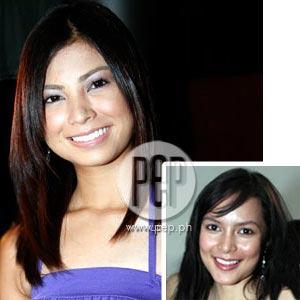 Some say the movie—which includes Jinggoy Estrada, Ricky Davao, and Richard Gomez in the cast—could have been a good opportunity for Jewel Mische, who declined the role "because of personal conviction." In her blog, the young actress wrote (published as is): "I'm going to be honest, I miss working, and I am worried that this incident won't help me make my network realize that I WANT TO WORK. I really do."

One person's loss is another's gain.

In a blog entry, Jewel explained her side (published as is):

"First of all, I want you to know that I was really looking forward to do this film. The script was sent to me 2 days before the 1st shooting day. I refused to play the role and before you hear any reasons from the newspaper or wherever, hear it straight from me.

"As you have already read from somewhere, there will be a love scene, let me quote from the script "mapusok na naglo-love making si -name of characters-" .. I got shocked.

"Now please know, it is not a sexy film, and it will be directed by a great and talented director, direk Mel (who is by the way, very gracious and understanding of me), I am sure direk Mel and the team has a plan already of how to execute that particular scene for the movie. I understood the story after reading the whole script.

"While the goal of the movie (to my understanding) is to show "reality" - the evil of the society, e.g. dirty politics, injustice, immorality, etc.. I cannot do it, not for any other reason but because of personal conviction. The movie is full of violence and swearing, and the character that I was supposed to portray is a teenager who is sexually involved with her boyfriend and worse I have to "act it". It is beyond my moral standards.

"I am not saying the movie is wrong, in fact it is correct in a sense that it is true in picking up some of the common problems of the society, it is very realistic and for that I commend the scriptwriter. I heard that the movie is an "all star cast", and if I am not mistaken only two of us are "babies" from the business, it would have been really great to be working with all of them.

"On the first day of shooting my call time was 8:30 am, I arrived almost 2 hours earlier.. When I was having my heart to heart talk with direk Mel, he started by telling me that I am their first and only choice for the role, I was thanking him and telling him how flattered I am but at the same time I was telling him little by little about my dilemma, Imagine how hard it was for me to hear all the recognition from him but at the same time I know as the conversation builds up, it will eventually lead to 'I can't do it'.

"I know I am an actress and I'm supposed to 'act' and give justice to whatever role is given to me, pero mahirap kalaban ang personal conviction and because of that, I cannot compromise.

"Ever since Starstruck days, 'maarte at pasaway' ako because I didn't want to wear clothes that will show a lot of skin. You know I was suspended for not wearing a 2-piece and ramp on national tv; I was really angry because I was asked to attend a photoshoot and I didn't know it was for a mensmag cover. I have had issues like these. Ang hirap. I regret agreeing to do a kissing scene while doing my first teleserye, cos now people can question me na bakit noon pumayag ako, even then I was only forced to do so."