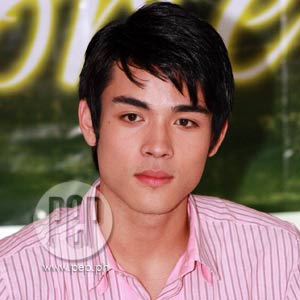 Talking about the similarities he and Erich Gonzales have, newcomer Xian Lim said: "Pareho kami ng interest like sa food, we don't eat pork. She likes vegetables, ako din." Both also are not fond of gimmicks or night-outs. "I don't have anything against it pero hindi lang talaga for me. She [Erich] doesn't like drinking, ako din."

Is there something romantic going on between Erich Gonzales and newcomer Xian Lim?

Xian, however, clarified that he doesn't want to mislead the public when it comes to the true state of his relationship with the 18-year-old actress—well, at least as of the moment.

According to Xian, what they have is a special kind of friendship. It also helps that both of them are compatible in so many ways despite their contrasting backgrounds.

"I can put it in one word," Xian—whose full name is Alexander Lim—said when asked to describe Erich, "Unbelievable." He repeated, "Unbelievable talaga."

Xian and Ejay Falcon will serve as Erich's leading men in the television adaptation of the classic coming-of-age 80's film, Katorse.

Ejay and Erich will have a kissing scene, while Xian remains clueless whether he too will have the chance to kiss his screen partner on cam.

Asked about the possibility, Xian said, "Of course, we have to be professional and dapat take one lang, hindi dapat take 20 'yan, di ba?" he joked.

HARDCOURT OR SHOW BUSINESS? Before show business came knocking, Xian initially wanted to be a professional basketball player—a dream he hasn't completely given up at this point.

"I wanna take one step at a time kung ano na lang 'yong mangyayari. And I plan to still continue some school and kung kaya [to be a basketball player], di ba, why not?"

Xian—who is an upcoming sophomore Management student—is currently part of Team B of the University of the East Red Warriors.

The 19-year-old hunk is uncertain on what career path to take, but he's excited nonetheless about what the future holds for him.