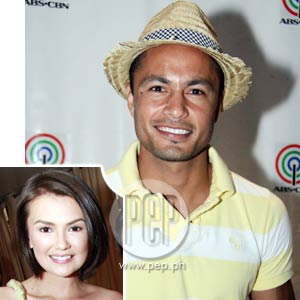 "She completes me. She makes me happy." This is how Derek Ramsay describes his three-year girlfriend Angelica Panganiban, who he thinks is the right girl for him.

Derek Ramsay has been saying in his previous interviews how much he would love to do a movie with his girlfriend, Angelica Panganiban. Now, it's finally happening.

The 29-year-old actor inked a two-movie contract with Star Cinema yesterday and one of these movies will be the project with Angelica and former matinee idol Gabby Concepcion.

In an interview before the contract signing at the ELJ Building in the ABS-CBN compound, he excitedly talked about the movie.

Derek said that the daring scenes between Angelica and Gabby wouldn't be a problem because it's required in the story. "As I said, sabi ko, I like the story. It's not naman, the scenes that are daring weren't put there just to be there. You know, they [Gabby and Angelica's characters] are married.

"You know, I've seen her do roles like that before. I supported her in A Love Story (2007). Tingnan mo yung kinalabasan nu'n, sobrang ganda. I'm sure, this one will be just like that."

The Maruja actor added that daring scenes are not going to be a problem because he and Angelica have already built a strong relationship.

HECTIC SCHEDULE. During the interview, Derek admitted that with his very busy schedule, sometimes he loses time for his three-year girlfriend Angelica. Right now, his time is mostly consumed with taping his four current and upcoming teleseryes—Komiks Presents: Nasaan Ka Maruja?, Precious Heart Romances, Habang May Buhay, and The Wedding—and shooting his two upcoming movies with Star Cinema.

Despite lack of time, Derek said it's not an issue in his romantic relationship with the 22-year-old actress.

"I wouldn't say suffer because Angel and I have a secure relationship. We both know that we're gonna have time in the future and what we're doing right now is part also of what we want to do for ourselves.

HIS OWN TAKE ON MARRIAGE. When asked if he thinks Angelica is already the girl for him, Derek answered, "Yeah, she has all the qualities of being that person. She completes me. She makes me happy. You know, when I'm down, I used to run to my dad and my mom. But she's there na. Yeah, I can really see the qualities in her."

However, Derek said that there still no plans on getting married. "I don't know, we haven't seriously talked about it, so I don't know. Basta si Angel, I know her dream is to settle down. When the time is right, I'll give that to her," he related.

The actor also took this opportunity to clear up his previous statement on marriage, which was taken out of context by some members of the entertainment media.

"That's taken the wrong way," he clarified. "I have parents who have been married for nearly 40 years. I have the perfect example to follow. What I meant with what I said was that it's not as important to me as to the other people."

Derek continued, "Getting married doesn't prove that I love that person more. You know, for me, if my partner, if that's her dream, I'll give that to her. I would give that, for her. What I was just saying, you know, what I don't understand about marriage is how come there's so many loopholes—annulment, divorce, so many broken marriages.

"Parang I consider myself lucky na I didn't experience any of that. I had parents who stood by each other for the many years that they've been together. For me, it's not that I don't believe in marriage, it's just not as important to me."

Derek asserted, "What I'm just trying to say is that it doesn't prove that I love you more if I marry you."