Derek Ramsay admits to "complete shutdown" of his system 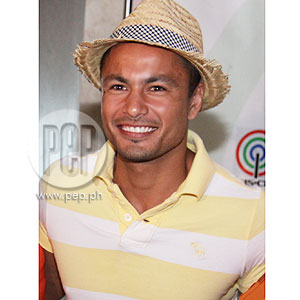 "Madaming magagaling na artista na ganyan. Ako, I just do my job, you know, in and out. Face my responsibilities as an actor with my role," says Derek Ramsay about competing with other actors.

In an interview before his contract signing for two movies with Star Cinema, the 29-year-old actor told the entertainment press that he was not able to work for a few days because he had to admit himself to the hospital.

"Naospital ako last week, complete shutdown ng system ko," he began. " I just found out I have kidney problems. My creatinine level was too high. I went in, kasi sumusuka na nga ako. Sa harapan ng mga direktor ko, talagang sumusuka ako. Walang tigil na suka and LBM [loose bowel movement], so I gotta go to the hospital. I went to the hospital for that, and they took my blood and I realized na may kidney problems ako.

"But the main reason was amoebiasis. I had it for a while and something that I ate triggered it again, kasi hindi na mawawala sa system mo 'yan, e. Ang nangyayari diyan, 'pag gumagalaw yung amoeba, dun ka magkakasakit. So, I'm taking medications to check that parasites. So, yun, nanghina ako, I took a couple of days off, which helped, but I'm still recovering."

Derek said he was not able to pay attention to it right away because of his busy schedule. Right now, his time is used up by work on his first movie with girlfriend Angelica Panganiban and another movie with Bea Alonzo and Sam Milby. He's also taping four teleseryes—Komiks Presents Nasaan Ka Maruja, Precious Heart Romances, Habang May Buhay, and The Wedding.

Derek also revealed to PEP that there were moments when he felt the need to stop from working because it's too much already.

"I've been close to burning out," Derek related. "Even there was a time sa sports ko, ayoko na mag-sports, too much of something is bad. But I am bound by our contract and I have responsibility to take. So that's why I still put in 100 percent in everything that I do. But, yeah, inisip ko na sa sarili ko, 'Hindi ko na kaya 'to. Ano bang ginagawa ko sa sarili ko? Is it work? Is it this, is it that?' I'd be the first person to say na I've reached that point, but it bounces back and it tells yourself, 'Hey, hindi pa tapos.'

Amidst all the pressure from work, Derek said that he just try to find something that will keep him from being stressed out.

He also mentioned his girlfriend of three years, Angelica Panganiban, as someone who gives him motivation to continue.

"You know, you find another way to motivate yourself, that's why sometimes I talk to Angel. 'Angel, hindi ko na kaya.' She says, 'Kaya mo 'yan, konti na lang.' She's a big help when it comes to that."

SHOWBIZ IS NOT FOREVER. Derek is aware that the success he's getting right now will also come to an end someday. This is the reason he's giving his best to every project he does while enjoying his job.

He further said, "I know, one day [it will end]. You know, parang rollercoaster ride, I'll gonna ride it till it ends. There's always gonna be someone better, something new, better looking. That's life, it's a cycle. And the only thing is, you should be able to grasp when the time is over."

Derek also knows that sooner or later, a newcomer will be introduced and will be loved by people and his time in showbiz will be over.

"You know, and when your time is over, somebody else has the chance, somebody else will be blessed. You just, you know, been there, done that. Time to move on, find the next blessing that is offered to you, and grab it—that's how I live my life.