Karylle does not want to rush into any new love affair 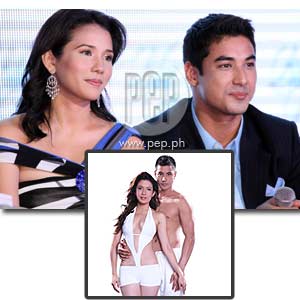 Last year, Marian Rivera and Piolo Pascual were heralded as the endorsers of BlueWater Day Spa. For 2009, the wellness company decided to tap the services of Karylle and Brazilian-Japanese model Akihiro Sato.

BlueWater Day Spa vice-president Francis Ryan Simisim explained why they chose Karylle and Akihiro as the face and body of their company: "Every year, we change our endorsers. We chose them because they are the rising stars and we respect their popularity."

Last May 26, BlueWater Day Spa introduced the concept of a Spa Theater that is located in Ortigas Avenue. Instead of theater seats, modern spa chairs allow viewers to watch their favorite movie as they are given a foot spa or foot massage.

BlueWater also showed the new print advertisements that will be used by the company in promoting its new treatments.

One particular layout stood out since it featured Karylle clad only in a white cutout maillot swimsuit with a half-naked Akihiro standing right behind her.

Did Karylle feel awkward while shooting this ad? "No, kasi, the photos were taken by a good friend Sara Black who is...kabarkada niya 'yong best friend ko. So I've known her since I was about six so I was very comfortable working with her and I trusted her kasi alam mo yun, kaibigan mo na matagal na matagal na so I'm waiting for the photos to come out."

Does this mean that she will be having a sexy image from now on? "Hindi naman kasi it goes with the whole concept of the spa so that's why ok naman sa 'kin."

Is she now open to posing for men's magazines like FHM? "Actually, may mga men's magazine, from before pa sila nag-a-ask and hindi ko naman ginagawa pa."

How was it like working with Akihiro? "He's been very, very friendly and he really tries hard to learn how to speak in Filipino, so I find that interesting about him," says Karylle about her fellow endorser.

What was her first impression about him?

COMPARISON WITH MARIAN RIVERA. When Karylle accepted this endorsement, she was aware that Marian Rivera was the previous model of BlueDay Water Spa. Is she afraid of being compared to the GMA-7 actress, who is now being linked to Karylle's ex-boyfriend, Dingdong Dantes?

"And it was really an invite talaga before na to be an endorser for them. As in, dati pa kasi whenever you enter the spa, makikita mo talaga yung picture ng endorser. Sabi ko, 'One day, sana...' ganyan. And I never really thought na magkakatotoo siya. So, when they asked me, of course, I said yes."

Does she get tired of being linked constantly to her former boyfriend?

"Well, I spoke to my mom [Zsa Zsa Padilla] about it. Sabi ko, 'paano kaya? Should I answer the questions?' Well, just answer it and it will eventually die down. Eventually naman, parang ngayon konti na lang naman nagtatanong, e."

Does she think that the rumors will die down if she has her own love life?

JERICHO ROSALES. Karylle then clarified that Jericho Rosales is not courting her.

But would she say that she is close to Echo?

At this point in her life, is Karylle ready to go on dates with potential suitors?

Is Karylle ready to have another boyfriend?

Before the interview ended, Karylle admitted that she goes on group dates but she did not specify her companions.