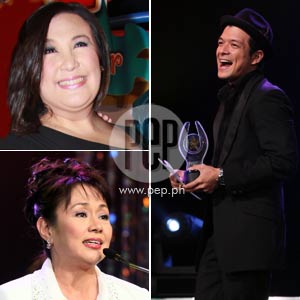 Garnering nine trophies from the Philippine Movie Press Club (PMPC), the period film Baler took home the lion's share of the honors given out last night, May 28, during the silver anniversary of the Star Awards for Movies.

Echo, who arrived at around 11:30 p.m. last night, was just in time to receive his acting award for playing the role of a soldier in love with Feliza (played by Anne Curtis).

This time, the actor will be shedding tears of joy for his triumph.

Sharon Cuneta was hailed as the Movie Actress of the Year for her performance in Caregiver, but she was unable to attend the awarding ceremony held at the Henry Lee Irwin theater of the Ateneo de Manila University.

Two stars tied for the Movie Supporting Actor of the Year category: Emilio Garcia for Walang Kawala and German Moreno for Paupahan.

This is the second year in a row that Emilio has been named Movie Supporting Actor of the Year by the PMPC. Last year, he was recognized for his supporting role in Selda.

SPECIAL AWARDS. One of the most highly-anticipated segments was the Ulirang Artista Award conferred to Batangas Governor Vilma Santos. In the middle of the program, the Star for all Seasons entered the venue, causing a flurry of excitement among the fans.

After a few minutes, her co-star John Lloyd Cruz arrived and sat down with the actress-politician. JLC introduced Ms. Vilma as a person who crossed over from the world of entertainment to the world of politics and is much admired in both realms.

When Ate Vi went up the stage to accept her award, she emphasized her love for acting even though she already holds public office.

Later on, a special award was also given to the people involved in Himala, the Filipino film that won in the CNN poll for Best Asian Film of All Time. Ricky Lee, scriptwriter of Himala, admitted onstage, "Masarap tumanggap ng karangalan para sa pelikulang sinulat mo 26 years ago."

Hosting the event were Ai-Ai delas Alas, Maricel Soriano, and Cesar Montano. Some of the presenters that night were Richard Gomez (who announced Sharon Cuneta as the Movie Star of the Year), Helen Gamboa, Yul Servo, and Baron Geisler, among others.


Special guests who performed at the Ateneo were Toni Gonzaga, Ronnie Liang, and Jay-R Siaboc, as well as Christopher de Leon who sang "Sinasamba Kita" for his perennial leading lady Vilma Santos. Sarah Geronimo, who was wearing a light purple gown by Rhett Eala, gave her passionate rendition of "Paano Kita Mapasasalamatan."

Here are the other winners of the 25th edition of the Star Awards for Movies:


Movie Child Performer of the Year: Julian Duque of Boses

New Movie Actress of the Year: KC Concepcion of For the First Time

New Movie Actor of the Year: Sherwin Ordonez of Kurap

Movie Editor of the Year: Danny Anonuevo of Baler

Movie Original Screenplay of the Year: Roy Iglesias of Baler

Movie Cinematographer of the Year: Lee Meily of Baler

Movie Musical Scorer of the Year: Jessie Lasaten of Ploning

Movie Sound Engineer of the Year: Ditoy Aguila of Baler

Movie Original Theme Song of the Year: "Ngayon, Bukas at Kailanman" from Baler

Digital Movie Theme Song of the Year: "Sangandaan" from Paupahan

Newsmaker of the Year: Manny Pacquiao

Darling of the Press: Herbert Bautista