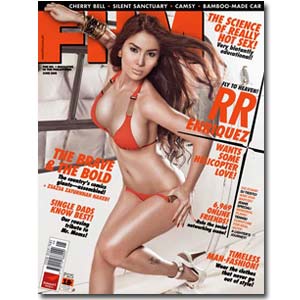 A kissing bandit is on the loose, and she goes by the name RR Enriquez.

First featured in the pages of FHM as Heaven Enriquez in 2006, RR has caught the public eye with her stint in the gag show Banana Split and the immensely popular noontime show Wowowee. This June, she flies high on the cover of FHM, making her debut in a shoot that has her posing astride a helicopter.

There is clearly more to RR than people are led to believe. Here is a woman who knows what she wants, most especially when it comes to men. Declaring her preference for older men, RR says, “Sa may edad, kahit papaano, he’ll treat me nang maayos. Bine-baby ka. Mas gusto ko yung gano'n.”

At the rate she’s going, we may not have to wait long to see RR’s star on the rise.

See RR in the flesh at the FHM autograph signing session on June 5, Friday, 6:00 to 8:00 P.M. at the Robinsons Movieworld in Robinsons Galleria.Make sure you have your copies of the June issue of FHM ready for RR’s signature. FHM is available in newsstands, bookstores, and supermarkets nationwide. For more of FHM online, visit www.FHM.com.ph.