Will Devaughn tells how he lost his six-pack abs 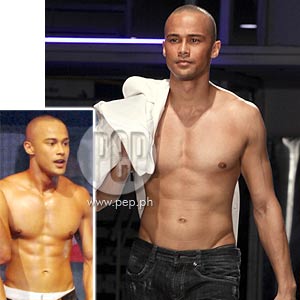 Last year, during the Cosmopolitan Bachelor Bash, Will Devaughn walked the ramp with his enigmatic smile and six-pack abs (inset). In less than a year, he strutted the runway again, but...where are his six-pack abs?

During the Black Magic fashion show of Jag, people noticed quite a change in Will Devaughn's physique—from lean to a bit muscled, from six-pack to just flat abs.

He still looks good, but his fans have this gnawing thought: "What happened to his six-pack abs?"

For a moment, Will's facial expression turned a bit pensive before he replied, "Kasi before, parang I was soul-searching."

During his introspection, he didn't go to gym for about "six months."

We asked him, why the soul-searching? He answered rather evasively, "Wala lang. Di ko alam. Di ko sure, e."

Things went back to normal "two months ago," he said, but he still faced another problem: insomnia.

He clarified, however, that his sleeping habits have improved. In his own words, "much better ngayon."

We repeated our question about the things that bother him, and after pausing for a few seconds, he revealed, "Kasi mag-isa lang dito. Parang gano'n. I miss my family."

He is scheduled to see them every Christmas, but he's planning to fly to the U.S. this July or August.

And what can he say about Wendy Valdez, his new screen partner?

"Okay naman...Kasi my story hasn't come out yet. We haven't taped," said the model-actor-host.

But he's very excited about the project. "Ganda. I mean as of now, number one sa noontime. Ang ganda ng story nila, e..."

The last time we had a chat with him, he was learning how to speak Tagalog fluently and was more on the thin side. He may have lost his abs, but his overall physique is still swoon-worthy, and his charm, as one showbiz reporter puts it, is "still irresistible."