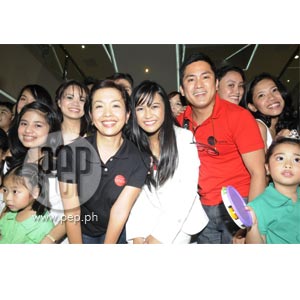 After a successful summer showcase held at The Podium last June 6, Spotlight announces its succeeding round of group workshops starting this July. These include the five-month course Musical Theatre 1 and 2, Creative Dance and Movement for Actors, Spotlight Kids, Scriptwriting (facilitated by Rody Vera), Acting (facilitated by Paolo O'Hara) and Directing Workshops. Also offered are individual classes for voice, guitar, drums, violin and piano. For details, log on to

It takes one to know one—that is, in terms of recognizing, honing and nurturing world-class talent.

After years of earning recognition in the international theater scene, Robert and Isay, together with other equally-talented colleagues in the world of theater and entertainment, have taken it upon themselves to turn the spotlight on a new generation of theater artists.

One such theater prodigy is the 13-year-old Mayumi Morales. The sister of popular child actor-singer Makisig Morales is a consistent honor student and has been selected as one of SAC's scholars since she joined the school's pilot batch of Musical Theatre enrollees.

After intensive training, Mayumi breezed through the advanced acting, creative dance and movement courses. And now she's all set to display her exceptional talent and become the school's first representative to this year's World Championships of Performing Arts (WCOPA) in Hollywood.

Like proud parents, Isay and Robert are confident about Mayumi's chances of winning in the WCOPA event, raising funds and making all necessary arrangements to ensure her participation.

"We are very optimistic about Mayumi's chances there," Isay shares excitedly. "With her talent and our prayers, we're very sure she can bag the junior world championship title and do our country proud."

For his part, Robert's output in the Integrated Scriptwriting and Directing Workshop under the multi-awarded theater director Nestor Torre is one of the entries to this year's Cinemalaya, which opens next month. The film titled What Floor Po, Ma'am?, was written by Robert, who co-directed it with Mike Sandejas. It also stars Pinky Marquez and Lex Marcos.

Kelly Latti, one of the students from the first batch of Spotlight's five-month Musical Theatre course will play the lead role in Atlantis Productions' Spring Awakening, which will be staged in August.

It's been a year since the theater couple put up SAC. In a previous interview (click HERE to read article), the couple described the endeavor as "vigorous." Now that their students are set to be in the spotlight, Isay was right when she also said, "Really sulit."