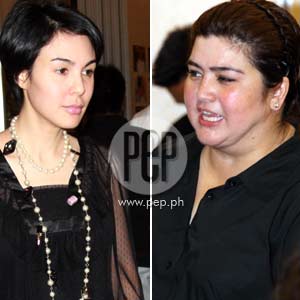 Gretchen Barretto (left) and Nadia Montenegro (right) met for the first time after their long-standing rift at Douglas Quijano's wake last night, June 17. Nadia made the first move by hugging Gretchen for a few seconds.

Even in death, Douglas Quijano lives up to his reputation as "the peacemaker" in showbiz.

PEP (Philippine Entertainment Portal) witnessed this firsthand when Nadia Montenegro made the first move to hug Gretchen Barretto during the fourth night, June 17, of Tito Doug's wake at the Heritage Park in Taguig City.

Gretchen was seated at one of the tables in the middle of the chapel when Nadia suddenly hugged her tightly for several seconds. Their common friend Pops Fernandez also saw the touching event.

Does this mean that Gretchen and Nadia have truly forgiven each other, at last?

RENEWAL OF FRIENDSHIP. When PEP talked with both Nadia and Gretchen, the two women admitted that the gesture showed their willingness to start their friendship all over again.

Nadia pointed out, "This is the first time I saw her and it wasn't hard for me to do it because I'm sure that's what Tito Douglas would have wanted."

She added, "We're not going to talk about anything about the past for sure. Understood na yun, kasi Dougs has always been a mediator."

Did she say anything to Gretchen as she hugged her?

What does this hug mean?

"Peace," Nadia replied. "I know that she came yesterday, but I had a 40-degree fever. So, sabi ko, 'It's probably not time.' Then noong sinabi sa akin na nandiyan siya, I just went straight to her."

How did she feel afterwards?

Does Nadia still have anything to say to Gretchen?

Nadia ended the interview by saying, "Maybe today is the right time and everything just fell into place."

PUT EVERYTHING BEHIND. Later that night, PEP was able to talk with Gretchen regarding her encounter with Nadia. How does she feel about reconciling with Nadia?

"You know, now that we're in the wake of Tito Douglas, you can put everything behind. Nag-usap na naman kami ni Nadia in the past. I know in my heart, we're okay," Gretchen said.

Will their friendship ever go back to the way it was in the past?