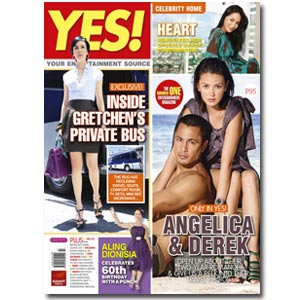 Like ordinary commuters, Gretchen Barretto takes the bus to work. But unlike everyone else, Gretchen actually owns the bus.

"I was postponing [my taping for Maalaala Mo Kaya] because walang banyo," she tells YES! magazine in the July 2009 issue. "I was supposed to be poor. So, kung nasa squatters ako, pa'no 'yon? Twenty-four hours ka magwo-work, tapos walang banyo? E, I'm so maarte with banyo. So I said, I'll get a bus."

"I just wanted a chair that can recline and move around because I know na nakakahilo kapag bed," says Gretchen. "I never wanted a bed because someone else will just lie there and make kalat. Papatungan lang ng kung anu-ano."

As for the bathroom, it has a sink, shelves, a toilet that flushes with 22 liters of water from a deposit, and an exhaust fan. "I could really wash up, like, the whole body," Gretchen says. "It's really nice because I want to be clean all the time."

The private bus serves as Gretchen's home away from home since her work takes her to various parts of the country. When she's not working, the family uses the bus for out-of-town trips and by daughter Dominique for outings with friends.

For Gretchen, having her own bus is nothing to be shocked about.

"I get shocked that people still make it a big thing," she says. "It's just a bus, relax."

This month, YES! also features an exclusive interview with Angelica Panganiban and Derek Ramsay, who talk about their three-year romance and share their personal travel photos. And Heart Evangelista talks about her newly-renovated upscale condo unit.

The July issue of YES! is now available in newsstands, bookstores, and supermarkets nationwide.