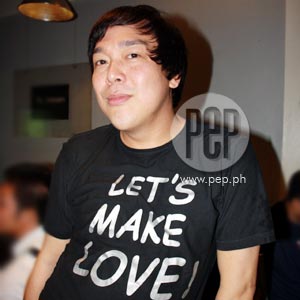 "Salamat sa suporta. After 16 years in the business it's a big deal for me. Kaya ako siguro tumagal dito is because of the people who support me. Sa mga naniniwala sa aking God-given talent, maraming-maraming salamat!" says John "Sweet" Lapus to his fans.

Many would feel lucky to be in the shoes of John "Sweet" Lapus even for just a day. The TV host-comedian is enjoying the peak of his career as one of the hosts of the GMA-7 Sunday afternoon talk show Showbiz Central, as a cast member in the primetime comedy series Adik Sa 'Yo, and he has an upcoming sitcom to boot. His recent "Sweet 16" anniversary concert was a riot!

But what's most special about Sweet is that he will forever stay 30 years young. Or so he jokingly claimed during his birthday party last Monday, July 6, at Taumbayan restaurant in Kamuning, Quezon City.

The Showbiz Central host who was born on July 7, 1973 told PEP (Philippine Entertainment Portal) that his only birthday wish is to enjoy good health despite getting on with age. "Tumatanda na ako. I'm not getting younger. Nagiging sakitin na ako. Ang dami ko na ngang iniinom na gamot."

Sweet was recently diagnosed with a mild case of Bell's palsy, a rare illness that can paralyze one side of a person's face. An early diagnosis, and treatment with steroids, proved fruiful as he was able to arrest the disease's development.

The comedian-actor added that since the disease may have been caused by stress, he now ignores people who don't like him.

What can he say to his fans?

"Salamat sa suporta. After 16 years in the business it's a big deal for me. Kaya ako siguro tumagal dito is because of the people who support me. Sa mga naniniwala sa aking God-given talent. Maraming-maraming salamat!" Sweet said.

John "Sweet" Lapus may be celebrating his 36th birthday, not his 30th, but it's worth rejoicing because he is surrounded by people who love him. This may be Sweet's sweetest birthday ever.