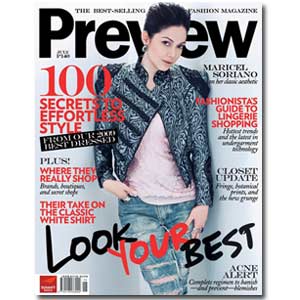 Maricel Soriano shows her "trendy side" in the July 2009 issue of Preview magazine. Coincidentally, the jacket she wore is inspired by Michael Jackson, who died last June 26, which was also the night Preview held its Best Dressed ball. Says Preview editor-in-chief Pauline Suaco-Juan, "The outfit took on the renewed significance..."

Maricel Sorianohas always been known as a classic dresser. To see her wearing a military-style jacket and tattered denims on the cover of Previewmagazine's July issue comes as a surprise to many, especially when they learn that she is one of Preview's Ten Best-Dressed for 2009.

And the selection process for the said prestigious list in local fashion is no caprice. Preview editor-in-chief Pauline Suaco-Juan told PEP (Philippine Entertainment Portal), "Throughout the year, the editors go out, go to parties, and they look at girls. Occasionally, when we find someone na baka puwede, we ask them. Then we do a style profile, check their closets, and see if they'll make it."

The Diamond Star's name came up and the editors' unanimous reaction was, "Oo nga no!"

Pauline elaborated, "I don't think she's ever been recognized for her clothes. And she was saying nga, 'I'm older than most girls you normally choose,' which is also one of the reasons why it became imperative for us because we always feel that, and we believe that style is not exclusive to the young. It's not just about brands, or being young, or body type or shape, or budget. She fits exactly what we were looking for. Where other girls in the list were trendy, she fit that balance. You could grow older but still remain stylish."

MARIA AS COVER GIRL. Working with the 44-year-old actress is "very, very fun." Pauline was not present during the shoot, but the story that reached her in Paris was that "they all love her."

She related, "It's funny because we were all kind of intimidated, I guess by the reputation of her being mataray...And all of us were anxious about the shoot because we were wondering if there would be any diva moment, but she was very, very fun to work with. I was texting them all from Paris, 'How was it?' They were like, 'It's so easy to work with her.'

"And she's telling me during the party [Preview Best Dressed Ball, click here to read article] that she had so much fun because the poses that Vince [Uy, creative director] made her do, something that she had never done before."

The staff members present at the shoot didn't have a hard time choosing her wardrobe. The Kapamilya actress brought most of her amazing "designer stuff."

Pauline said, "We realized that her style is very low-key, very easy to overlook because she likes basics. There's nothing that shouts designer about her style even if what she wears is 'Oh my god, the most worshipped designer on the planet.'"

But for the cover, the editorial team asked her to go beyond her classic taste in clothes by going for a "trendier look."

She wore a Michael Jackson-inspired outfit—which, according to the Preview editor—"is really a huge trend for spring summer: the Balmain jacket, which is a top fashion pick of U.S. pop star Rihanna."

MARICEL AS FASHIONISTA. Maria admitted being surprised when Preview approached her. She said, "My personal style is simple, basic, and classic. I invest in pants and tops I can wear over and over, comfortable elegant shoes and bags in basic colors."

Preview took a peek into Maricel's fashion diary and followed her to TV guestings and beyond to capture her look.

As one of this year's Best-Dressed ladies, Maricel shared her 10 style rules, one of which is to know your body flaws. "Since I'm not too tall, I try to stick to one color, something that will not cut me up," she says, "My biggest insecurity is my arms, so I always choose to cover them. I will never wear a sleeveless top." Yet Preview was able to convince Maricel to don a sleeveless dress by Jill Sander just for their photo shoot.

See more of Maricel's best-dressed style and find out who else made it to Preview's list of Best-Dressed ladies this year by grabbing your copy of the July issue of Preview, available in newsstands, bookstores, and supermarkets nationwide. For your daily dose of fashion, visit Preview's online affiliate, www.StyleBible.ph.