Marian Rivera is excited about Darna's amped up look 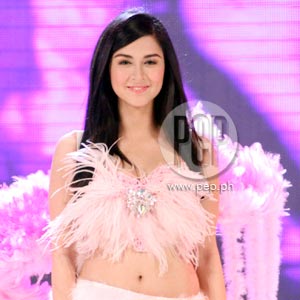 Marian Rivera can't help but rave about the new costume, new leading man, and everything else that her new show Narda has to offer.

Last Monday, June 29, Marian Rivera wore the costume of Darna in the officially titled Narda TV series for the first time. Marian looked overjoyed, saying the experience was both fun and gratifying.

The Darna costume boasts simple yet noticeable changes, giving the young actress her own identity for the role, which had been played before by top actresses like Vilma Santos. According to Marian, the costume was revamped with added accessories and designs. For instance, the color of the "lampin," as Marian calls the trailing cloth in front of her pants that gives her a new, polished look.

NEW LEADING MAN. The success of the Dingdong Dantes-Marian Rivera team on the shows Marimar and Ang Babaeng Hinugot sa Aking Tadyang made people wonder if Marian could sustain interest without the assistance of Dingdong. When news about Darna came out, people speculated on who could possibly be a good candidate for Marian's leading man.

Has anything changed with Dingdong's absence?

IWA MOTO AS VALENTINA. Iwa Moto has been chosen to play Darna's arch-enemy Valentina, though news had it that the role was first offered to Katrina Halili. Rumors flew that Marian had something to do with who got the Valentina role. Did she actually tell management to offer the role to Iwa instead?

SUPPORT FOR NEWBIE CARLA. Marian openly supports fellow Kapuso actress, newcomer Carla Abellana, because she sees herself in her. Like Carla, she was new to the industry and then she was suddenly offered a big break.