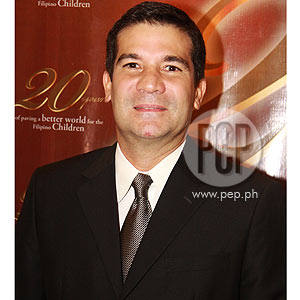 The scuttling of Edu Manzano's brief role in the movie starring his son Luis Manzano and ex-wife Vilma Santos may have been a disappointment, but this issue is minuscule next to the problems that he faces as chairman of the anti-piracy Optical Media Board. Right now his office is trying to broaden its scope to grapple with the downloading of local entertainment products on the Internet.

It was reported earlier that Edu Manzano would do a small part in the still-untitled movie of his son Luis Manzano with his mother, Batangas Governor Vilma Santos. Unfortunately, this won't happen anymore, Edu told the press at the 20th anniversary celebration of the ABS-CBN Foundation last July 3 at the Meralco Theater in Pasig City.

Nevertheless, Edu is still excited to see the movie of his son and his former wife with young actor John Lloyd Cruz. In fact, he is aware that Luis will have a kissing scene with John Lloyd in the film.

Did he give advice to Luis about this scene?

He then related how much he trusts his son as an actor. "You know, my son has the most fantastic sense of humor in the entire industry. I believe that he's a fantastic and the most talented individual. Pero dahil lagi siyang nagpapatawa, people take him lightly. But he's very, very serious individual who takes his craft very, very seriously. For him, this is work. For him, this is to prove to one and all that, 'I have what it takes to be a permanent fixture sa industriyang ito.'"

FAMILY OF PUBLIC SERVANTS. Since it's only a few months before the 2010 elections, PEP (Philippine Entertainment Portal) asked the former vice mayor of Makati if he plans to run again for a government seat next year.

Edu half-jokingly replied, "I think about it, then I forget about it. Pero paggising ko, naiisip ko na naman. Actually, I was thinking about the presidency... ng Rotary Club."

Does Luis have any plan to be part of the government in the future?

Edu did not answer directly. He just mentioned the help that his son has been giving to those in need.

"I don't know if you know it, but nasusulat din naman, minsan nababalita yung mga ginagawa ng anak ko sa kanyang kapwa. You know, you don't have to be in a public office to be a public servant. And my son is quite famous also for his generosity."

Edu was also open to giving his support to Batangas Governor Vilma, who is reportedly running for reelection in 2010. He said, "As you can see, we're a family who take our role as public servants very, very seriously. Whatever it is that she embarks on, I wish her all the best of luck."

LOWER RATE OF CD/DVD PIRACY. As the chairman of the Optical Media Board, Edu gave encouraging news about his office's drive to stop piracy in the country. He said, "Piracy is going down. The latest study in the Philippines is 16 percent, bumababa ang physical [piracy]."

However, he said that piracy has become more prevalent on the Internet. He explained, "Ang bago kasi ngayon, it's all Internet downloading, e. Kasi, it's very logical, why will I get in my car, magsasayang ng gasoline, matratrapik, magpa-parking, magbabayad ng parking, maglalakad pa ako just to buy DVDs or CDs when I can just go to the Internet and download everything."

He admitted that it would be hard to take action since the country still has no law that prohibits Internet downloading.

He told PEP, "We have no specific law because probably we did not look at technology development from that point of view. Hindi natin naisip na ganun magde-develop, na ganung kabilis, so hindi tayo nakapaghanda."

Although this issue is not yet part of OMB's coverage, Edu is still concerned about putting a stop to it. He said, "We take it upon ourselves to put stakeholders together doon sa pinag-uusapan ang problema ng downloading at kung ano ang maisa-suggest po naming probisyon sa isang batas. We spoke to the stakeholders and we've met with Senator Jinggoy Estrada, and they're impressed with Senator Jinggoy. I mean, he has some very good ideas. And he said, as a matter of fact I also spoke to Senator Allan Peter Cayetano, that they will put all of these ideas together and try to fast-track it to the Senate so it will eventually become a law."

He added, "Ang sa amin lang, bagamat hindi nga siya sakop ng OMB, we still see the effect on the industry. The day will come wala na ang CDs and DVDs. It will all be on the Internet."