Roselle Monteverde dominates the dance floor during her birthday celebration 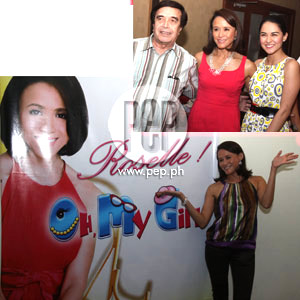 Roselle Monteverde-Teo gamely posed in front of the tarpaulin located at the mezzanine of Imperial Palace Suites in Quezon City. Among those who attended her birthday party last night, July 14, were German Moreno and Marian Rivera (inset).

Film producer Roselle Monteverde-Teo usually celebrates her birthday in the United States but work got in the way this year. As head of Regal Entertainment, she couldn't leave the country because their film OMG! (Oh, My Girl!) will have its premiere on July 29. The upcoming romantic comedy is topbilled by Judy Ann Santos and Ogie Alcasid but both stars were unable to attend the grand celebration of the female executive last night, July 14, at the Imperial Palace Suites.

Ms. Roselle told PEP (Philippine Entertainment Portal) that this is her first time to celebrate in a grand fashion. "Mother convinced me to have this celebration," she admitted, referring to her mother, Regal matriarch Lily Monteverde.

She had a dance floor set up in the Imperial Palace Suites mezzanine where the party was held from 8 p.m. until the wee hours of the morning. The birthday girl—whose actual natal day falls on July 14—dominated the dance floor as the band Hyperbeat churned out upbeat songs from the '80s and more recent tunes such as those by Beyonce and Lady Gaga.

Darna star Marian Rivera attended the event with her manager Popoy Caritativo. She chatted with GMA-7 executives Wilma Galvante, Marivin Arayata, and Gigi Santiago before she left around 10 p.m. The young actress explained that she needed to wake up early for the Darna taping that will take place in Bulacan.

Talent manager Arnold Vegafria arrived at the event with Lisa Gokongwei-Cheng, president of Summit Media. Arnold sometimes became the dance partner of Roselle as she danced the night away with her friends and colleagues.

Also spotted at the event were movie directors Joel Lamangan, Gil Portes, and Mel Chionglo, as well as actress-writer Raquel Villavicencio. Senator Loren Legarda graced the event and she told PEP that she has been a close friend of Mother Lily for several years now.

By 10 p.m., the party was in full swing as guests twirled with their partners on the dance floor. Roselle joined the band onstage to lead the guests in dancing to the tunes of "Bongga Ka Day" and "Buttercup." When the band played the Hagibis classic "Legs," they invited ABS-CBN reporter Mario Dumaual to join in the fun. He gamely agreed and even engaged in a dance showdown with the two female singers as they gyrated their hips to the beat of the music.

When "You're Just Too good To Be True" was played, Bubbles and Carla became the center of everyone's attention as they swung around the dance floor with their respective partners. Mother Lily also made it a point to bust some dance moves with former film director Anthony Taylor.

As midnight neared, Tim Yap and Arnold grabbed microphones and joined the band in singing "Just Got Lucky."

As the night wore on, it was clear that Ms. Roselle is certainly lucky to be celebrating her birthday in Manila this year!