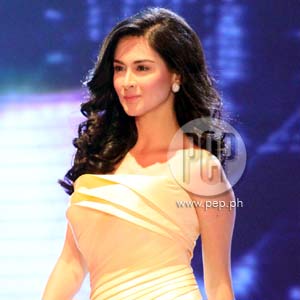 Marian Rivera may no longer be FHM Philippines' queen for 2009 but she's still very much in the radar of the country's number one men's magazine, as revealed to PEP by Editor-in-Chief Allan Madrilejos.

Marian Rivera may have failed to defend her crown as the country's sexiest but it doesn't mean that FHM Philippines is about to wave the white flag concerning her much anticipated cover debut.

PEP (Philippine Entertainment Portal) had the chance to talk to FHM Philippines Editor-in-Chief Allan Madrilejos last July 1 at the Kamayan/Saisaki/Dad's restaurant in Greenhills, EDSA. The press conference was staged to promote the upcoming 100 Sexiest Women in the World event to be held on July 9 at the World Trade Center in Pasay City.

Negotiations for Marian's possible FHM cover appearance are still ongoing, according to Allan.

The entire team behind the magazine is hopeful that Marian's forthcoming television role as the sexy high-flying Pinay superhero, Darna, would somehow loosen the cordon and finally convince the young actress to accept the long-standing proposal.

Allan personally feels that Marian's strong showing and eventual triumph last year would not be complete without the validation that comes with gracing the front page of the nation's premier men's magazine.

Marian's reluctance to pose this early in a men's magazine is widely known inside the publishing circuit, prompting some to wonder how FHM took it when the 24-year-old actress appeared soaking wet while clad in a white shirt with a two-piece bathing suit underneath for the 2009 calendar of a popular liquor brand.

Marian relinquished her throne as FHM's Sexiest Woman this year to Cristine Reyes. The lead star of the Darna serial Narda finished third (technically second in the local listing) in the overall ranking for this year's edition of the annual event.