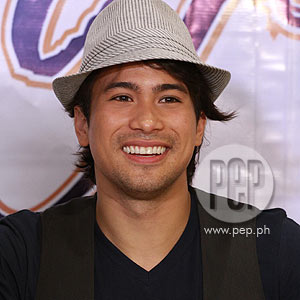 Sam Milby says that ex-girlfriend Anne Curtis told him about the non-showbiz guy she's currently dating. For him, it's not an issue because, "I think we both moved on and masaya ako para sa kanya. Kung saan siya magiging happy, happy ako sa kanya."

Sam Milby met the members of the entertainment press even on a rainy Sunday to express his gratitude for the continued success of his TV series with Angel Locsin and Diether Ocampo, Only You, the Pinoy adaptation of a Koreanovela of the same title.

At the media junket prepared for him yesterday, July 5, at 8 Spices Thai Cuisine restaurant, Sam admitted that he is excited and anxious at the same time over his first TV series with Angel Locsin.

Although he's already into a new loveteam with Angel, Sam admitted that his team-up with former girlfriend Anne Curtis really has a strong following. So, when asked if there's a possibility for him to work with Anne again in a project, Sam answered, "Siguro, baka they are planning kasi malakas 'yong following namin. We have a very strong following, 'yong loveteam namin ni Anne. I'm sure they're thinking about a movie or soap, kami ni Anne, we're okay, comfortable naman kami."

He also clarified, "Talagang okay na okay na kami and I think we're both past that stage where we're really in the awkward stage, we're really friends now."

"PINAKA-DEEP NA LOVE." This is how the 25-year-old actor described his past relationship with The Wedding actress, Anne Curtis.

This was also his reaction about the previous interview with Anne, where she described Sam as an "ideal husband." (Click here to read related article.)

"Of course, it's another flattering comment for her to say that, coming from a beautiful girl. You know, like I said before, everyone knows na kung gaano ka-in love kami noong time na kami pa rin. Ako, I'm the type na kung may girlfriend, siya talaga. I mean, 'yong focus ko, talagang sa kanya lang," he said.

ANNE'S NEW DATE. Although many fans of Sam and Anne are hoping they'd get back together, he thinks it might be impossible.

"Okay, una, siyempre malabo ngayon kasi, I mean, we both decided na mag-move on na kami. Pero she has a guy she's dating, so okay. Probably we can get ano, come together naman din, di ba?" he explained.

So, he knows that Anne is going out with a non-showbiz guy? (Click here to read related article.)

While Anne was seen with her "man of the moment" in Ruffa's surprise birthday party recently, Sam remains single.

Sam mentioned his busy schedule as the cause of a zero lovelife.

"Who wouldn't want to be in love, di ba? Ako, I don't know if it's a reason enough, but bising-busy ako ngayon. I don't wanna use it as an excuse. But it's nothing na parang hahanapin ko, parang you look for it. Gusto kong mangyari siya," he said.