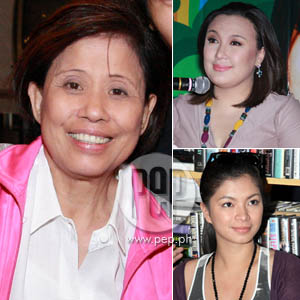 Mother Lily Monteverde (main photo) said she was hurt when Angel Locsin (inset, bottom) refused to do Mano Po 6 with Regal Films, to be top-billed by Sharon Cuneta (inset, top) due to an exclusive contract with Star Cinema. The film producer, however, said the young actress still has a commitment to do three movies under her company. "She was one of my babies once," Mother Lily said. "As her mother, I got hurt because she had

"Angel Locsin should learn from Sharon Cuneta how to honor her commitments."

This was the statement of Lily Monteverde, matriarch of Regal Films, in an email sent to PEP (Philippine Entertainment Portal) earlier today, July 6. The film producer said this is a reaction to Angel's alleged refusal to co-star with Sharon Cuneta in the upcoming Regal movie, Mano Po 6, an entry in the 2009 Metro Manila Film Festival.

Sharon was quoted saying that if given a choice, she would want Angel to be part of the movie. (Click here to read related story.)

In a recent interview with PEP, Angel said she can't do the Sharon Cuneta starrer because she is currently signed with ABS-CBN's Star Cinema. (Click here to read related story.)

Angel, who was originally an exclusive GMA-7 contract star, still had a commitment with Regal to do three movies, according to Mother Lily. A sudden decision to move to ABS-CBN in July 2007, however, disregarded the filming contract, thereby severing the ties between the actress and the Regal matriarch.

Mano Po 6 would have been Angel's seventh movie with the production company, had she taken the role. Previous films include three Mano Po films, Kuya, Singles, and Sigaw.

In the email, Mother Lily said she was hurt when Angel refused to do the role.

"She was one of my babies once," Mother Lily said. "As her mother, I got hurt because she had a commitment with me to do three more movies. But still I let go of this issue because I want her to grow."

The film producer added that she does not want to "rock the boat" because she is friends with the ABS-CBN bosses—Geny and Gaby Lopez, Charo Santos, and Cory Vidanes. "Malalim ang pinagsamahan," she said.

Her message to Angel, however, was to emulate how the Megastar honors her commitments.

"Sharon Cuneta has become a Megastar not only because she is a talented singer-actress, but because she is loyal and knows how to honor a commitment... marunong tumanaw ng utang na loob," Mother Lily explained.

Although Sharon originally started as the prized talent of Viva Films in the 1980s, Mother Lily had a long-standing offer to do a movie with her. Mano Po 6 will be the first Regal full-length movie starring the award-winning actress. The Megastar has a cameo role in OMG! (Oh, My Girl!), starring her close friends Judy Ann Santos and Ogie Alcasid.

HOW TO SUCCEED. Roselle Monteverde, the daughter of Mother Lily, has more to say on the issue.

In a telephone interview with PEP this afternoon, Roselle said she does not know how Angel got the information that Regal is interested in doing a movie with her again.

Roselle also wants to know why Angel is talking about her contract with Regal again.

Roselle also does not know whether they want to do another movie with Angel, even after she finishes her exclusive contract with Star Cinema. She said the actress should just follow Mother Lily's advice because she wouldn't succeed in showbiz if she doesn't.