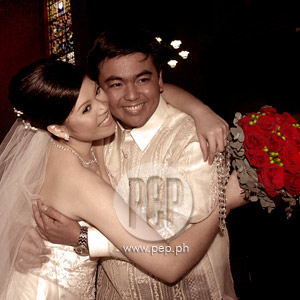 Actress Maybelyn dela Cruz, 25 (now 26), has a certain glow about her that she credits to being "very happily married" to Dagupan City Councilor Michael Fernandez, 34 (now 35).

The two met in 2005, during the National Assembly of the Philippine Councilors League (PCL). The assembly takes place once every three years.

"I hosted the event, he was my co-host," Maybelyn recalls. "'Tapos, everybody in the league, kinakantiyawan kami. Kasi, for three consecutive assemblies nila, ako 'yong host."

Michael showed an interest in Maybelyn, but the former child star was hesitant to take him seriously.

When she finally agreed on a lunch date, Maybelyn brought along her best friend, Ryan Balcora (who would be one of the groomsmen during the wedding).

After three months of dating, Maybelyn and Michael were officially a couple.

Despite the distance and their busy schedules—with Michael's duties as PCL national chairman, and Maybelyn's showbiz commitments, such as her recent stint on GMA-7's Impostora and Babangon Ako't Dudurugin Kita—the two managed to make the relationship work. They took turns visiting each other.

On June 5, 2006, the two celebrated their first anniversary as sweethearts.
It turned out to be another momentous occasion.

"He couldn't come to Manila for our anniversary, so I went to Dagupan instead. Simple dinner lang. 'Tapos, pina-clear niya 'yong table. Sabi ko, 'Mag-o-order ka pa?' 'Tapos, ayan na, may mga flowers. 'Tapos, he just handed me the box. Pag-open ko, nakita ko 'yong ring. I just knew it. He didn't have to say a word. I just hugged him, 'tapos sabi ko, 'Yes.'"

On January 20, 2008, Maybelyn and Michael got married at the Manila Metropolitan Cathedral in Manila. After the wedding, the newlyweds went on a three-day trip to Macau—a gift from their ninang, Dagupan Vice-Mayor Belen Fernandez—but the official honeymoon was held in Italy last June 2008.