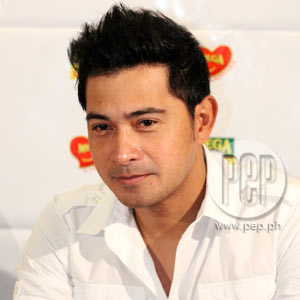 Cesar Montano is "99.5 percent sure" of running in the upcoming 2010 national elections. This time, however, the actor-host is eyeing a local government post in his hometown of Bohol instead of a senate seat, which he vied for in 2007.

Montano ran for senator in 2007 under the Team Unity coalition, but lost, ranking 22 out 37 candidates overall, based on the final tally submitted by the Commission on Elections. Only 12 senate seats were up for grabs that year. Also that year, no entertainer made it to the senate.

At the press conference tendered by Mega Sardines last Thursday, August 20, held at Cesar's own Bellissimo Ristorante on Tomas Morato, Quezon City, Cesar announced his decision to give politics another shot despite his disappointing performance two years ago.

Cesar—who will be running for the position of governor—said he intends to use the experience he gained from 2007 to his advantage. Cesar shared some of the painful life lessons he learned during that campaign.

LOVE YOURSELF. "One important lesson is to love yourself," Cesar said. "You should never forget to think about yourself; at the end of the day, kailangan humihinga ka pa rin."

STAY STRONG. Obviously referring to the late action superstar Fernando Poe Jr., he also said that the back-breaking demands of the campaign could break any individual. Exhaustion, disappointment, and heartbreak were expected to escalate, he said, as the campaign accelerated.

Poe ran for president in 2004 against incumbent president Gloria Macapagal-Arroyo. Poe eventually lost amidst speculations of massive cheating by his opponent. The actor suffered a stroke on December 11, 2004, and died days after slipping into a coma at the St. Luke's Medical Center in Quezon City. His election protest was pending with the Comelec when he died.


PREPARE YOUR FINANCES. Cesar might as well have added: prepare your finances. The multi-awarded action star, producer, and director reportedly lost P40 million worth of possible endorsement deals during the 2007 elections. The Comelec strictly prohibits political candidates from endorsing any brand while in the middle of a campaign, based on the justified premise that appearing in any commercial or advertisement gives a candidate undue advantage in terms of public exposure.

Admitting this, Cesar said, "I never intend to gain any financial reward [when I ran for public office]. I lost pa nga because I lost some endorsements na in-offer sa akin. Pero okay lang 'yon, at least napatunayan ko... I have something to tell to my children, na ito, may ipinaglaban ako dati, ginamit ko yung pangalan ko na Cesar Montano, and I used it in something noble."

Cesar revealed that his platform for Bohol will concentrate on education, agriculture, and bolstering the province's tourism business.

"I just want to bring the quality of education that my children get here in Manila and bring it there in Bohol because they [Boholanos] deserve it also."