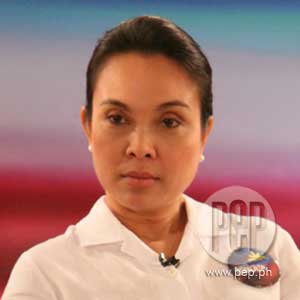 When Senator Loren Legarda declared last July 12 her desire to run for President, she said her only possible alliance was with former President Joseph Estrada. She refused to say, however, when she was asked today, August 26, whether she would agree to running only for Vice-President now that Estrada had expressed that he was "99.9 percent sure" he will run for the post again. "Patuloy ang aming pag-uusap," Legarda sa

The numbers are slipping for Senator Loren Legarda, but she does not mind.

The senator said yesterday, August 26, at the premiere of her animated film in Shangri-La Mall, that she's unperturbed by the decline of her ratings in a monthly Pulse Asia survey that measures the winnability of presidential aspirants.

Senator Legarda told the media that even though ratings are important for a candidate planning to run for a public office, they do not constitute the whole electoral landscape. The solon declared last month that she intends to run for President in 2010.

Results of the Pulse Asia poll released last Tuesday predicted that only six percent of voters would support Legarda's presidential bid. The figure was down by eight percent from the results in August last year.

The poll also declared that Senator Manny Villar will win the presidential race if the May 2010 elections were done today. Villar, who made his billions through real estate, garnered 25 percent.

The nationwide poll, which was conducted using face-to-face interviews from July 28 to August 10, covered 1,800 adults. It had a margin of error of plus or minus two percentage points.

Senator Legarda explained that the rise in the ratings of other aspirants may be partly because of their exposure in television ads. At present, the boob tube is the most powerful medium in terms of reach. As early as now, the two TV giants, GMA-7 and ABS-CBN, have been airing the TV plugs of Villar and Roxas, including the informmercial of De Castro for Pag-ibig Housing Loan.

LOREN'S TV ADS. The lady senator, who started her career as a broadcast journalist, is also a believer of the medium.

i-site.ph, the Philippine Center for Investigative Journalism's data bank on politics and government, released a report on May 2007 indicating that during the campaign for the 2007 elections, Legarda had spent almost 75.9 million pesos for TV ads alone.

One such 30-second plug, which can still be seen in YouTube, shows Legarda interacting with farmers, schoolchildren, and the poor. It carries the message "Loren Legarda: No. 1 sa Senado."

Last year, Legarda was among the first presidential hopefuls who booked spots for her ads. The 15-seconder "Pagbabago," which was shot in slums, featured the senator saying, "Pagbabago... panahon na. Kasama niyo ako." She also produced a 30-second ad for her environmental advocacy.

In March this year, these ads had stopped airing on TV but her pro-environment ads continue to hit radio airwaves.

POSSIBLE VIOLATION? Sec. 80 of the Omnibus Election Code prohibits political propaganda outside the prescribed electoral campaign period. For the presidential and vice-presidential races, the same law prescribes a 90-day campaign period, which will start on February 9 next year.

Sec. 261 of the Omnibus Election Code also prohibits the use of "public funds, money deposited in trust, equipment, facilities owned or controlled by the government" in running an election campaign.

In a press release dated July 2, 2009, Legarda said she believes her early ads did not violate the election code, because they were not meant for the electoral campaign. She said their only purpose was to carry her various advocacies, and to "educate and inform" the public about certain issues.

"It is not a violation of the election code for a politician, public official or potential candidate to come out with media advertisements so long as they do not directly ask for votes or resort to campaigning for public office outside of the campaign period fixed by law," Legarda asserted.

The senator added that the money used for the ads were donated by her friends, and that they are not public funds.

INVESTIGATING THE CABINET. Sen. Miriam Denfensor-Santiago was the first to raise her eyebrows on the infommercials, which currently dominate our TV screens. Legarda also became vocal about supporting Santiago's initiative to start an investigation on the government officials and Cabinet members featured in several TV ads that are currently airing.

In a public hearing held last Monday, August 24, Santiago questioned the source of the funds used to run these informmercials, which may be deemed a subliminal manner of early electioneering.

Santiago added that ads "paid by friends" may be a violation of the Anti-Graft Act.

Senator Legarda said Santiago was within her rights to instigate investigation.

The senator, on the other hand, said she won't release ads of her own at this time because it is too expensive for her.

ENVIRONMENTAL CARTOON. One of the advocacies that Loren is pushing for is taking care of the environment. For this purpose, she collaborated with the Creative Media and Film Society of the Philippines (CREAM), an animation company headed by former Ilocos Norte Representative Imee Marcos, to produce a cartoon series that will carry her message.

Titled Ligtas Likas, the cartoon tells the story of a young girl named Maya, who leads a team composed of Bobot, a compactor-robot, Tatang, a nature worshipper, and other creatures, to fight enemies of the environment.

The episodes premiered yesterday were about illegal logging and coral harvesting. It was viewed by more than 100 elementary school kids from Metro Manila, who were specially invited by Legarda's office.

Legarda said Ligtas Likas is reminiscent of the Oscar-winning documentary An Inconvenient Truth, which featured the campaign of former US Vice President Al Gore to educate citizens about global warming.

Through Ligtas Likas, Legarda wants to impart to Filipino children that it is important to practice and promote actions that will preserve the environment, like waste segregation and recycling.

To spread the message, the senator dares local moviehouses to show the series for free during weekends. TV networks should also consider to give it airtime, she added.

Legarda is also planning to embark on a nationwide school tour to promote the advocacy behind Ligtas Likas. Through the cartoon, plus the accompanying workbook and video game CD she is giving away, the senator hopes that school children will learn the cause.

Legarda denied, however, that her plans for Ligtas Likas are part of her electoral bid.