IN FOCUS: Behind the camera with Bianca King 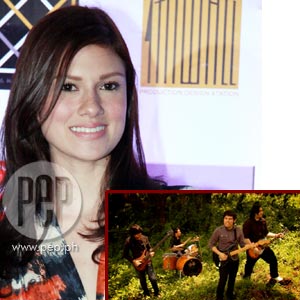 "I showed my short films for school to the Hale boys and they saw that I could direct. We thought it would be cool to direct a video since ready na rin ako, and because I'm friends with them, alam ko yung personality nila at kung anong babagay sa kanta. I had to present my concept to the label, complete with sequence breakdown, shot list and storyboard," actress turned video director Bianca King told PEP (Philippine Entertainment Portal) in an e-mail interview.

But that's exactly what the 23-year-old actress did when she and co-director Nani Naguit, gathered Champ Lui Pio, Roll Martinez, Sheldon Gellada, and Paolo Santiago—collectively known as the popular pop-rock unit Hale—along with actress Heart Evangelista, hied off to a forest to shoot the band's music video for a new single titled "Bahay Kubo."

The song is the band's first single taken from their latest album Kundiman, which is released under PolyEast Records.

"It was Champ's request to have a forest as the location and from there I constructed a story for 'Bahay Kubo.' The story, the design concept and overall direction came from me. I treated the video as a school project kaya very hands-on ako sa lahat. Pati damit ni Heart, pinagawa ko pa sa designer para ma-fulfill yung look na gusto ko," narrated Bianca.

"My co-director Nani Naguit, who served as my safety net, helped me formulate my ideas well. Dahil first ko, hindi pa ako 100 percent confident noon. Nakatulong yung presence ni Nani kasi kapag may idea ako for a shot na hindi ako sure kung magwu-work, I would consult him and we'd decide the best way to go about it."

LEARNING EXPERIENCE. Bianca—a Filmmaking scholar at the De La Salle College of St. Benilde—described the entire experience as an eye opener. It's often said that real wisdom is earned outside the classroom and that's exactly what Bianca learned while working on the music video.

"Tumaas lalo yung respeto ko sa mga nakakatrabaho ko kasi mahirap mag-shoot ng kahit ano, movie man, TV show or music video. It takes a lot of initiative and creativity to put together something like this. And as a director, I learned that everyone relies on you for everything. Walang kikilos kapag hindi ka mag-instruct kung anong gagawin. Hanggang sa editing, from start to finish, nandoon ako. Binantayan ko lahat and trinabaho lahat ng aspects ng buong project. Mahirap and it took a lot out of me, multi-tasking with school and Zorro tapings. Pero ibang klase yung fulfillment."

Bianca has done a few short films, mainly as part of her school projects for exhibit and presentation. Doing a music video presents its own set of unique challenges and dynamics, according to Bianca.

As a young director, how difficult or easy is it to do a music video?

MIXING WORK WITH LOVE. How about working with Champ? It's well known that the two celebrities are playing sweet music together. We were curious to know whether their personal relationship made the job a whole lot easier, or perhaps, more difficult.

"It's very hard!" she stressed. "Because every time he gets impatient sa tagal ng set-up and wants something specific, I get pressured to deliver. Kapag di niya kilala siguro yung director, hindi na kayang i-argue directly!" Bianca added with a laugh.

"I had to defend a lot of things also like getting an actress as a leading lady, the love story, et cetera... but it worked and they all couldn't be happier. But on the other hand, I'm very thankful they trusted me and gave me the opportunity to direct such a popular band. Very rare yun for a student director. Bihira sila magtiwala sa kung kani-kanino lang. And because Champ knows I take my filmmaking studies very seriously, he also had to trust me as his director, especially since this is the first video where he had to act and not just sing."

"Rebecca Red was a project for school where we had to use studio lights and employ the film-noir style. I was very fortunate to have Paloma as my lead actress because she played the femme fatale so well. She was also very game to do the pole-dancing scene.

"In Memory of was my first experiment to do a music video na walang band shots. I just borrowed the song "Blessed" of Up Dharma Down. I asked them muna, of course. Carla Humphries and Marc Abaya were my actors in this tragic love story that I wrote, directed and edited. One-man team ako!

"I was also the first in my batch to ever do an underwater shot and kissing scene. It turned out very well and has consistently been the finale for our special screenings of our student films, including our Cinemalaya exhibition. Oscar's World was the first project that we couldn't use live actors and we had to animate inanimate objects. We used the stop motion technique. "

Music, films and books play a huge role in stirring Bianca's creativity. Like any artist, the mestiza actress scouts around for any source of inspiration to help her visualize clearly the ideas running inside her head.

"I know I have a good idea for something when I can clearly watch a movie in my head about it. I dream about it and become slightly obsessive. It's like I sleep, eat, dream and live the concept."

So, what can we expect from Bianca King the director?

"I'm doing a short film for school now with Rhian Ramos as my lead actress. I wrote and directed it also. If it gets a go signal from my professor, I will most likely find a festival or competition where I can enter it.

"I'm also currently finishing my first screenplay which I started writing last year. Professionally, I want to do a few more music videos this year while I'm still studying. Then when I finish, hopefully do a full-length indie and go on to directing commercials.

"I can also direct or produce TV shows or mainstream movies but mainly I want to direct commercials. I think I'm the type of director who has the sensibilities that advertisers need, plus I like putting a lot of thought into a concept and every shot. Hindi ko kaya yung laging mabilisan na taping, once in a while maybe."

Lastly, Bianca revealed a dream project that she would like to do someday—a tested mainstream staple but actually long forgotten with the advent of reality shows and fantasy series.

"I want to revive the teen-show genre, to direct something like T.G.I.S or Gimik."