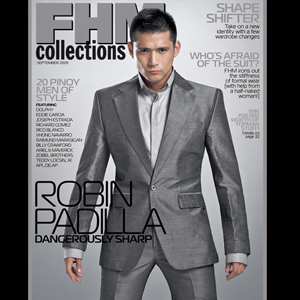 Gearing up for its tenth anniversary next year, FHM marks a milestone this September by releasing the first-ever Philippine edition of FHM Collections, a men's guide to style featuring Robin Padilla on the cover. This makes the "Bad Boy of Philippine Cinema" the first man to grace the cover of FHM Philippines.

FHM managing editor and project editor of FHM Collections Allan Hernandez says, "FHM Collections wants to capture men at their best. How they deal with the ever-evolving changes and challenges that they face. It's about maturity and cultivating character."

Editor-in-chief Allan Madrilejos adds, "FHM Collections is a new special issue that joins the grand scheme of annual special issues like the 100 Sexiest and the Ladies Confessions Special... It is also a validation of our manhood not in the usual company of women, but in the league of very distinguished gentlemen." Of their first male cover, Madrilejos says, "We can't think of any other Pinoy man who best represents our aspirations than Robin Padilla."

FLIP COVER. FHM Collections comes as a flip-cover execution with FHM's regular issue this September, which features Philippines' Finest Cristine Reyes on the cover. Two years after her FHM debut, Cristine is ready for the daring pictorial that takes place at the Subic-Clark-Tarlac Expressway (SCTEx) in front of hundreds of motorists.

Madrilejos says, "Since SCTEx opened last year, we've dreamt of doing a shoot there and we were really reserving this shoot for Cristine Reyes's FHM comeback, regardless of her ranking in the 100 Sexiest Women in the World 2009 campaign."

As it turned out, Cristine was declared this year's Sexiest Filipina, which convinced the FHM team even more to push through with the SCTEx shoot. "We wanted to celebrate her victory with a smashing, traffic-stopping pictorial, and we figured it was the best way to capture the journey that has been Cristine Reyes's life and career so far," adds Madrilejos.

"Compared to my debut... I'm more confident now," Cristine says, whose confidence goes as far as her willingness to stand atop the steel fence smack in the middle of SCTEx, "This time, when you ask kung puwedeng tanggalin yung strap nung swimsuit and lingerie ko, game ako."

QUEENIE IS NEXT? Now that he has already done an interview and photo shoot for the popular men's magazine, will Robin allow his daughter, Queenie, to be featured also in FHM.

See more of sharply-dressed Robin and Cristine's traffic-stopping photos in the September issue of FHM, available in newsstands and bookstores nationwide. For more of FHM online, visit www.FHM.com.ph.