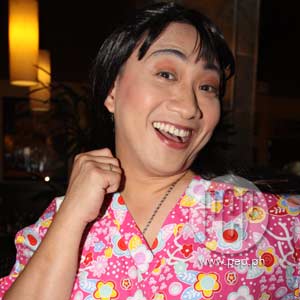 Pinoy master of disguises Michael V succesfully created a new character, Yaya, a hapless and naïve nanny who always gets the losing end in the mischievous exploits of "her" ward Angelina, played by Ogie Alcasid.

This situation inspired the Bubble Gang team to form the concept of a yaya from the Visayas who must contend with a spoiled, rich kid. The skit instantly became a hit, and Yaya and Angelina with their original 'loser' hand sign, became household names.

Did Michael ever think the characters would become so popular?

Yaya and Angelina, which will start showing on Sept. 23, is larger than their occasional skit—it has an assassination plot, kidnapping, and terrorism. Bitoy said the movie still has the Yaya-Angelina confrontation scenes that fans love.

What if these scenes send a wrong message to kids in the movie audience that it's all right to be spoiled?

The comedian added that the movie can teach valuable lessons.

Bitoy also shared an important philosophy to all the yayas in the country.

Despite this, Bitoy said he's still happy doing the five-year-old comedy show because it exceeded his initial expectations.

He added that he will agree with GMA-7's management if it orders the show's revamp.

Hole in the Wall, which he co-hosts with Ogie Alcasid, is now coming to an end. "Hanggang October na lang ang Hole in the Wall. Babalik kasi ang Family Feud [to be hosted by Richard Gomez]."