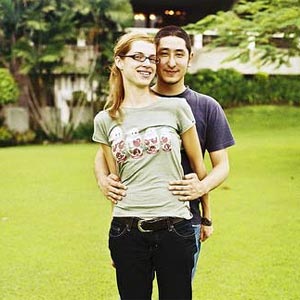 "Alexis is like a little brother to me. No matter what happens, if [the suspects] were caught, wala... They've taken something that can never be brought back," said newspaper columnist Erwin Romulo in an interview about Alexis Tioseco and his Slovenian girlfriend Nika Bohinc (in photo), who were murdered in their Quezon City home.

Friends and colleagues are mourning the loss of Filipino-Canadian film critic Alexis Tioseco and his film-journalist girlfriend who were killed in their home in Quezon City last Tuesday night, September 1.

Based on the report of GMA News, Tioseco and his Slovenian partner identified as Nika Bohinc were shot several times by three unidentified men who robbed their house on 39 Times St., Brgy. West Triangle, Quezon City.

In an interview, the police stated that the incident could be an inside job because the couple's new helper, identified as Criselda Gesman Dayag, let the three robbers inside the house. They hog-tied another helper, Magdalena Patpat, and shot Tioseco and Bohinc.

The three gunmen used the couple's Ford Lynx (CPW-329) as their getaway vehicle and fled the scene with Dayag after taking an undetermined amount of cash, jewelry, and a laptop.

In a radio interview, Quezon City Police District (QCPD) head Chie Superintendent Elmo San Diego said they are tracking down Dayag, who could be an accessory to the crime.

Tioseco was a faculty member of the University of Asia and the Pacific. He was also the founder and editor-in-chief of Criticine, an online journal of Southeast Asian cinema; and a regular contributor for several magazines and top newspapers.

Thai Film Journal mentioned in its blog that the slain film critic was also one of the founding programmers of the S-Express program series of Southeast Asian and Asian films that travels to film festivals in the region and around the world.

Tioseco met Nika at the International Film Festival Rotterdam in 2007, according to Gabe Klinger of TheAuters.com. Nika left her job as the chief editor of Ekran magazine, Slovenia's oldest and most respected film publication, and moved to the Philippines to live with Tioseco.

Tioseco expressed how much love he has for Nika in his "love letter" titled The Letter That I Would Love to Read To You, which was published in Rogue magazine last year. Tioseco was 28.