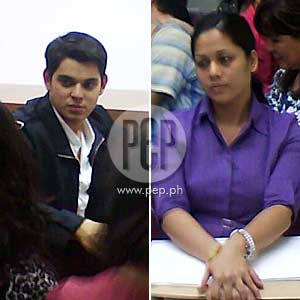 Actor Richard Gutierrez (left) and Lorayne Pardo (right) meet for the first time since the wake of Lorayne's husband, Nomar Pardo, at the preliminary investigation of the Reckless Imprudence Resulting in Homicide held earlier today, September 4, at the Imus City Hall of Justice.

Two interesting developments transpired today, September 4, in what was supposed to be the preliminary investigation of the case of Reckless Imprudence Resulting in Homicide filed by Lorayne Pardo against actor Richard Gutierrez, 25. Lorayne, 29, is the widow of Nomar Pardo, 42, who was Richard's personal assistant—better known in the entertainment business as a P.A.—and who died from a car accident last May 22 where the actor was the driver. (Click here to read related story)

One, Cavite Provincial Prosecutor Emmanuel Velasco announced to the press that the two parties were "open to settlement." At the same time, having issued a gag order prohibiting Lorayne and Richard from talking about the case, the two parties were unable to confirm or deny this.

Two, Lorayne's legal team says it finds the day's procedure "disturbing," saying that no hearing transpired, yet they had been called precisely to attend a preliminary investigation. Instead, what it got was a session on amicable settlement.

"OPEN TO SETTLEMENT." Cavite prosecutor Emmanuel Velasco told the press today, September 4, that the two parties in the Reckless Imprudence Resulting in Homicide case filed against actor Richard Gutierrez were "open to settlement."

After more than two hours of a closed-door mediation, which began at 10 a.m. at the Imus City Hall of Justice, Prosecutor Velasco told complainant Lorayne Pardo and Richard Gutierrez to take 15 days to think about an amicable settlement.

At the same time, Velasco issued a gag order preventing the two parties from talking to the media. There was thus no way of knowing whether the two parties, who had earlier made public avowals of not backing down, were actually inclined to settle.

Prosecutor Velasco, who is the son of former National Bureau of Investigation chief Epimaco Velasco, told PEP (Philippine Entertainment Portal) that his office was optimistic that the two would concur with the offer.

Velasco said his office had brought up the idea of an amicable settlement because he didn't want the court to be used as a "collection agent."

The gag order, he explained, will prevent the Pardos and the Gutierrezes from airing negotiation details to the public.

But he said his office will not impose a penalty if any party should break the order.

GRAND ENTRANCE. Caviteños in the vicinity were thrilled by the arrival of the Gutierrez family at around 9:30 a.m. A crowd of spectators wielding cameras filled the street as the celebrities alighted from a Mitsubishi Rosa micro-bus that they parked in front of the Imus City Hall of Justice.

Richard's group was immediately ushered to Preliminary Investigation Room No. 1, where Richard was expected to affirm the counter-affidavit his lawyer filed on Aug. 28. Richard had not been present on that day.

Eddie, Richard, Ramon Christopher, Pilita, and Annabelle occupied the whole second row of Room No. 1. Lorayne sat directly in front of Annabelle, but the two did not acknowledge each other's presence.

Fans started milling around the stars and asked to have their pictures taken with them. The stars obliged. At about 10 a.m., Prosecutor Velasco called the two parties to his office. He talked to them about working out an amicable settlement. He said he believed that a settlement was still possible.

Atty. Asuncion, Richard's counsel, then proposed that Prosecutor Velasco talk to the the complainant and the defendant individually. Atty. Jainal, Lorayne's counsel, agreed to the proposal.

Velasco first had a closed-door meeting with Lorayne, her father-in-law Ramon, and Atty. Jainal. After about twenty minutes, the three stepped out of Velasco's office and were ushered to another room, which was also the room where the Gutierrezes had been waiting. When the two camps passed by each other in the corridor, neither one acknowledged the other's presence.

While Velasco was in his closed-door meeting with Richard, Annabelle, Eddie, Ruffa, Monching, Pilita, and their two lawyers, Atty. Mallari and Atty. Asuncion, and Lorayne was waiting in another room, PEP managed to have a brief conversation with her. (At this point, there was as yet no gag order issued.)

We asked if she was inclined to settle. Lorayne said that despite the prosecutor's offer, she was not. In her words, "Kung ikaw ba iyong namatayan, makikipag-settle ka ba?"

After about ten minutes, Prosecutor Velasco asked Lorayne and Richard to talk to each other in a room adjoining Velasco's office, but not within sight of the others. Their conversation lasted more than 30 minutes, according to Velasco.

The meeting between the actor and the widow was relatively quiet, and no sound escaped the room where they stayed. Both parties were also unwilling to divulge the details of their conversation to the press, more possibly because of the gag order than from a natural reluctance to vent.

A source who works in the Hall of Justice also told PEP that before the mediation ended, Richard finally affirmed his counter-affidavit. Lorayne also passed and subscribed to her own Letter of Reply.

The gag order prevented PEP from procuring copies of the said documents.

Annabelle, who routinely has a lot to say to the press, said only, "Bawal, bawal," before clamming up.

The proceedings ended at 12:05 p.m. The two parties are expected to return to Prosecutor Velasco's office on Sept. 18 to continue settlement talks.

"IT'S DISTURBING." When towards evening, PEP got in touch with Atty. Firdausi Abbas, of the Abbas Law Firm handling Lorayne's complaint, the lawyer expressed his misgivings about what transpired at the preliminary investigation. By phone, he told PEP:

"Now, it's different. There is a no investigating fiscal who knows the law who will not find a prima facie case. There is sufficient evidence—bakit walang hearing? He accepted the affidavit. They [prosecutor's office] did not do anything illegal or irregular, but I find them disturbing."