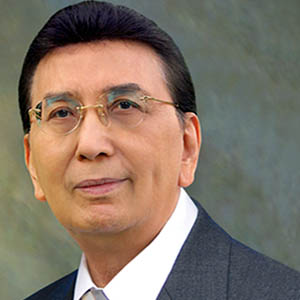 "He wasn't just any hero, he was God's chosen hero, Bro. Eraño G. Manalo... Perhaps, the outside world may not stop in a moment of contemplation. People may still go on with their lives as if nothing happened. Others will be preoccupied with the latest in gadgets, or anything for that matter. For all I know, they could care less. But for me? I will go on standing strong with my head held high, as I proudly tell the world. And I won't be shy about it, I won

On September 2, 2009, two days after Iglesia Ni Cristo (INC) Executive Minister Bro. Eraño G. Manalo passed away, PEP (Philippine Entertainment Portal) received an email from reader and INC member Awi Tiosen, who wished to have her note published here on PEP, with the desire that brethren from around the world may read it.

Entitled "Very Much A Hero. My Hero," her letter reads:

"Last night I was watching on TV, a late-night discussion at the Explainer's Dialogues on how to be a hero, which was but appropriate as yesterday was National Heroes' Day. The discussion was not just on the day's celebration but on being a hero or doing acts of heroism. For me, being a hero doesn't mean getting shot or killed for one's country, or having one's monument built, or even having a street named after him. For me, being a hero means not only saving a life by getting a person out of a building that is burning. In a spiritual sense, to me a hero is one who is an instrument in saving lives and souls by imparting God's words and wisdom through the gospel despite great odds and the jeering of many who think that once a great leader has passed away, his flock will follow in a downward direction with him.

"Well, in my lifetime, I met a hero. He wasn't just any hero, he was God's chosen hero, Bro. Eraño G. Manalo. I am proud to be born on his day of birth, January 2. He passed away yesterday, 31st of August 2009, while many were either celebrating National Heroes' Day or condemning the government for naming as heroes people whom they believe do not have the right to be called as such.

"Anyway, I met him—my hero—when I was young. I was probably four years old then, or younger. I remember his firm grip as I shook hands with him. At home we have an album with photographs showing a younger me with him. I distinctly remember that every year on my birthday, we would visit him and when my youngest sister was born, he was there to welcome us. My sister and I share the same birthday with him. But today, my hero, him whom I was telling you, was given his much-deserved rest by the Father Almighty.

"I was saddened along with my officemates and my older sister beside me when the minister who was in charge of our department broke the news that he was gone.

"Perhaps, the outside world may not stop in a moment of contemplation. People may still go on with their lives as if nothing happened. Others will be preoccupied with the latest in gadgets, or anything for that matter. For all I know, they could care less. But for me? I will go on standing strong with my head held high, as I proudly tell the world. And I won't be shy about it, I won't cower and stay in one corner. Yes, for I am proud to be an Iglesia ni Cristo. And I am proud to have met God's chosen hero."

THE WORLD DOES CARE. The events that transpired in the last three days prove contrary to Ms. Tiosen's thought that the outside world may not care less.

Upon receiving news on Tuesday morning of Ka Erdy's death, members of the Church flocked to the Central Temple along Commonwealth Avenue, Quezon City as early as 11 a.m., even when the announcement said his body won't be open for public viewing until around three in the afternoon.

Born on January 2, 1925, Ka Erdy oversaw the Church for 46 years after his father, Ka Felix Y. Manalo, died in 1963. It was under Ka Erdy's leadership that the Iglesia Ni Cristo reached overseas, with its first locale outside of the Philippines, in Honolulu, Hawaii, U.S.A., dedicated in 1968.

The INC faithful braved heavy traffic, undeterred by the heavy downpour, just to get in line and pay their last respects. Most came straight from school or work, others from faraway places and even the provinces. On the first night of the wake, people fell in line for eight to nine hours, most without food and water. But very few gave up their slots to rest, if only to see their beloved leader for the last time.

Police peg an average of 5,000 people troop to the Central temple every day, with the figure increasing due to the influx of brethren coming from all parts of the world. The line going to Ka Erdy's coffin hasn't stopped, except when the public viewing closed to make way for the worship services on Wednesday and Thursday nights. Upon reaching his coffin, many wiped tears from their eyes, and the elderly women wept openly for the Executive Minister who, throughout his leadership, underscored the importance of spiritual maturity and perfect unity.

Inside the temple, ministers and Central employees wore black armbands. During the midweek worship services all over the world, church officers sported small black ribbons on the left side of their chests, while a big black ribbon hung on the chair where the Executive Minister sat in the tribunal whenever he officiated the worship service.

POLITICAL PERSONALITIES. While the ordinary people, which included the elderly, pregnant women, children and even babies, patiently waited to get inside the Central Temple, the country's highest officials and politicians also continued to come to express their condolences to the Manalo family and the entire Iglesia Ni Cristo.

On Wednesday afternoon, Sept. 2, after adjourning their session early, members of the House of Representatives led by Speaker Prospero Nograles boarded three buses and headed to the wake. Opposition and administration congressmen were for a while united in paying their last respects to Ka Erdy.

Leaders from all colors of the political spectrum continued to arrive at the wake, from the President down to the other national and local officials, and even figures who used to hold government posts.

Leaders from different churches and congregations also came to the Central Temple, including: Bro. Mike Velarde, leader of Catholic charismatic group of El Shaddai; Jesus is Lord leader Bro. Eddie Villanueva; representatives of the Ecumenical Council of the Philippines; and the Malacañang inter-faith fellowship.

STARS PAY THEIR RESPECTS. On Thursday night, Megastar Charon Cuneta arrived with her husband, Sen. Francis "Kiko" Pangilinan. Sharon, who is close to the Manalo family, couldn't hold back tears when she embraced some of the bereaved family members.

NATIONAL DAY OF MOURNING. In a breaking news item aired over Net 25 this afternoon, Sept. 4, INC spokesperson Bro. Bienvenido C. Santiago announced that Bro. Eraño G. Manalo's interment will be held on September 7, Monday, 12:00 noon at the Tabernacle located near the Central Temple.

His remains will then be transferred upon completion of the mausoleum to be built near the monument of his father, the late Bro. Felix Y. Manalo, located within the grounds of the Iglesia Ni Cristo Complex in Quezon City.

Malacañang has declared September 7 a non-working holiday and national day of mourning.