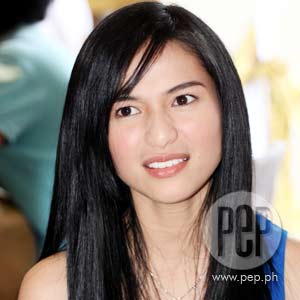 Jennylyn Mercado is feeling every bit relieved now that the robbery charges filed against her by former PA Rowena "Mel" Pulmano have been dismissed. According to Jen, the decision should put to rest any doubts the public may have had about her integrity.

Singer-actress Jennylyn Mercado feels that her reputation has been restored with the dismissal of the robbery charges filed against her by former personal assistant Rowena "Mel" Pulmano. Aside from that, she scored another legal point when her qualified theft charges against Mel were deemed as having "probable cause" by Quezon City Assistant Prosecutor Arleen Tagaban (click here to read the story).

"Siguro ito na yung sagot na wala akong ginawang masama," Jen said in her interview on Startalk yesterday, September 5. She said she was happy that the long wait bore positive results for her.

QUALIFIED THEFT A VERY SERIOUS CHARGE. Mel may have gotten out of a tight spot with the dismissal of the falsification charges against her, but she faces an even bigger problem. As it turns out, the charge of qualified theft may be more serious punishment-wise. If Mel is placed under arrest, she may have problems posting bail.

Explained Atty. Joji, "Depende sa amount. May configuration siya and in this case, qualified theft siya, so two degrees higher. Ang exact amount para maging non-bailable is P222,000. Since lumagpas nang P460,000, automatically non-bailable. The reason there being another consideration, of course, is the penalty that may be imposed sa ganitong klaseng krimen."

How much prison time would Mel get if proven guilty?

"Since this is qualified theft, automatic iyon na two degrees higher. So it will now range from 20 years and one day to 40 years," explained Att. Joji. "This is a very serious case. Akala kasi ng iba laro-laro lang ito, but these are very serious charges."

That explained, does Jen want her former assistant behind bars?

For Atty. Joji, the recent development is the next step in their case against Mel. According to her, the qualified theft charge would be filed, raffled, and the judge would determine the case and look at the recommendations. If the judge sees that there is probable cause, the next step would be the issuance of an arrest warrant. Atty. Joji added that there is really nothing Jen can do even if Mel asks for forgiveness, since the whole case would now be for a judge to decide.

But has Jen forgiven Mel after all of this?