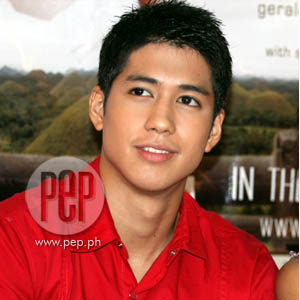 The year 2009 is a good year for Aljur Abrenica and screen partner Kris Bernal.

After the critical success of their afternoon soap Dapat Ka Bang Mahalin?, GMA-7 gave them the chance to star in the primetime soap through All My Life, which is currently receiving ratings success.

Now, Regal Entertainment has given them a launching movie through Nandito Ako... Nagmamahal Sa 'Yo, showing on September 27.

Shot entirely in Bohol, the beautiful Philippine province that is home to the famous Chocolate Hills, the Regal movie tells the story of a young man who falls in love with his half-brother's fiancée.

Towards the end of the film's trailer, which has been aired in cinemas and on television, Aljur and Kris are shown entangled in a passionate kiss in the middle of a forest. The kissing scene—one of the film's three—serves as one of the film's highlights, and the performances of the two young actors do it justice.

In the press conference for the movie yesterday, Sept. 10, at the Imperial Palace Suites in Quezon City, Aljur revealed that shooting the kiss took a long 10 minutes.

"Ninamnam ko po yung kiss," the young man admitted. And when asked if he felt "electricity" whenever he kissed his screen partner, he also admitted, "Mayroon po."

But when asked if they kiss in real life, Aljur sat silent for a moment before saying, "Sa amin na lang po 'yon."

But Aljur did say that if he ever gets a girlfriend in real life, it would be Kris. And although he refused to confirm the status of their relationship, he revealed that he is not dating anyone else at the moment.

Was Kris his first kiss?

BOHOL SIDE TRIP. Aljur revealed that he and Kris now do most things together—like training in the gym, eating, and going to church. They also connect with each other using today's technology—when away from each other, they send text messages and chat using Yahoo Messenger.

He also took care of Kris during their shoot in Bohol, a place he said he fell in love with. If given a chance, he said he wants to go back to the tourist haven with the young actress.

Aljur revealed that the moment he remembers most from their stay is the one night he and Kris escaped from the shooting camp without the knowledge of any of the movie's staff and crew. They went "strolling" in Bohol on a motorcycle.

"Yung nag-stroll kami, nag-motor kami nang hindi nila alam," he said, earning him a playful punch from Kris, who was standing beside him. The actress said, "Pasaway kasi 'to!"

Did Aljur consider the danger of riding a motorcycle with Kris?

But the side trip was worth it.