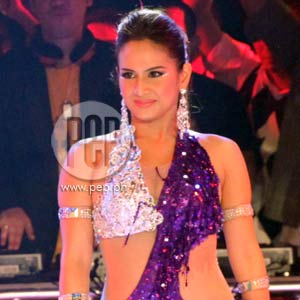 All's well that ends well: Television host-dancer Regine Tolentino said she's been cleared by the Social Security System (SSS) of the accusation that she withheld her employees' contributions to the government agency. Regine owns a kids clothing boutique located in Quezon City.

TV personality Regine Tolentino said that the complaint filed against her by the Social Security System (SSS) concerning her alleged failure to remit her employees' contributions was a classic case of misunderstanding.

"We were able to clear up the miscommunication with them," a relieved Regine told PEP (Philippine Entertainment Portal) in a phone interview yesterday, September 11.

Regine, who owns the kids' clothing boutique Regine's Children's Wear, allegedly failed to submit the contributions of her employees from August 2007 to January 2008 totalling P20, 950.08. Gonzales likewise accused Regine of ignoring previous reminders, particularly a demand letter, sent by the agency in the past.

"First of all, 'yong billing na 'yan was actually already paid because they're [Regine's employees] fully paid naman talaga and all of our documents are complete. They [the SSS staff] were even very sorry na lumabas itong chismis na ganyan."

As for the supposed demand letter, Regine said she cannot recall receiving any written notice from the SSS.

"Naka-state nga dun na the last letter they gave was August 15, 2008. Sabi ko hindi ko talaga na-receive 'yon. I've been in business for over 10 years and I would never be late. Hindi ko talaga gawain 'yon."

DAMAGING TO REPUTATION. Regine commended the SSS staff for being "accommodating" and "cooperative" while attending to the records and documents presented by the celebrity entrepreneur through her accountant and husband, Lander Vera Perez.

It is "damaging to the reputation of my business," she bluntly said.

"Because, siyempre, ten years na kami and sa halagang P20,000 lang, di ba? Yeah, they apologized and they were all quite nice to Lander. Everything's cleared up. However, I'm still a little bit saddened about how the news got so widespread and how it started because I still don't know who the source is."

In Gonzales's affidavit submitted to the court, the SSS accounts officer said that she personally visited Regine's shop on one occasion to inform her of the problem but the celebrity endorser allegedly ignored her verbal reminder.

There was indeed a visit from an agent, confessed Regine, but the purpose of the meeting, which happened "a year ago," was entirely not related to the issue of employees' remittances.

"When that came about, ang concern nung meeting na 'yon is this two ladies from this business na dati pa under my mom's name who put a loan in their name. It's kinda technical, actually," said Regine, sounding confused.

"They asked for a loan under my business name without our knowledge and I said kindly supply us with the proper documents. But actually, it was not a demand letter so I said you have to clear this up and I even talked to my accountant to take care of it. Because ayoko talaga ng ganyan na mga sabit or any type of hanging debts. So I really was not aware with any of these coz I never received any document talaga regarding the actual billing or demand or whatever. I have no knowledge."

FEELING VICTIMIZED. The SSS management was very apologetic about the error, according to Regine.

Looking on the bright side, Regine shared about the Thursday meeting, "Everything was quite positive. We were even able to update everything even further. Updated na nga siya [records and documents] dati, tapos ngayon mas malinaw pa talaga. And now we have direct contact with them."

We asked Regine how her staff reacted upon learning of the controversy.

"Hindi naman sila affected because they're fully aware of their benefits and how we run things in the business. We're all legally working in the shop and everything is fine naman. Tuloy-tuloy pa rin naman ang trabaho namin."

Though still smarting from the issue, Regine hopes to put the incident behind her and just "continue to be a regular taxpaying individual as I've always been."

"I can't say that I learned anything because I just feel in this situation medyo na-victimized ako. Hindi ko alam kung na-single out ako to be set as an example. Pero 'yon nga, I just felt a little bit offended because wala akong kasalanan and naiba ang story. Then 'yong communication—everything was really malabo."