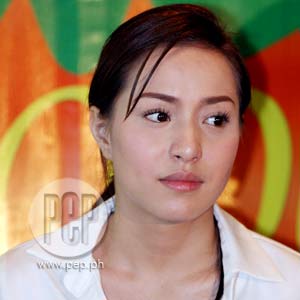 Cristine Reyes says she must work harder because she lost almost everything when her house in Provident Village, Marikina City, was submerged by flood during the onslaught of typhoon Ondoy last Saturday, September 26.

Not once did Cristine Reyes imagine she'd be a flood victim.

September 26 is a harrowing day for the 20-year-old actress. Together with her mom, her 18-year-old sister Mina Princess, her two pamangkins, and some neighbors—they got stranded on the rooftop of their house in Provident Village, Marikina City. With nowhere to go, they endured 12 hours of hunger, panic, and horrible fear.

But instead of sulking or lamenting, she woke up early the following day to start picking up the pieces. And on top of her to-do list was to forget the entire ordeal.

The flood began invading their area at around noon. In less than an hour, it reached the second level of their house. Cristine and her family were left with no choice but to climb to their roof.

Cristine also related a scenario involving her neighbors which she witnessed from the roof of her house. She said it was even more traumatic.

Rescue was nowhere in sight. Crying for help was useless, as the rescue team could not enter their area. Behind Provident Village runs Tumana River, a waterway that becomes infamous year after year due to its knack for sweeping vehicles and people under its depths whenever it overflows its banks.

Thankfully, her cellular phone was spared from the strong typhoon and flash flood. She frantically dialed every number in her phone book.

In the hours of her ordeal, she tearfully called big companies like ABS-CBN, GMA-7, and Viva Entertainment, but not one could send any help. The typhoon was still strong, and any attempt to penetrate the area was still dangerous.

She would also send photos and messages to her showbiz friends, like Maxene Magalona and Bianca King, who could only send her words of consolation.

MOVING ON. During the presscon, Cristine never shed a tear. With the help of the people around her, she tried to forget her traumatic experience.

Her two cars were soaked and damaged. Her house remains muddy. Her furniture and appliances wrecked. She even has no more clothes to wear.

But her friends readily helped her.

Lastly, Cristine just wants to put everything behind her. She didn't even want to estimate how much wealth she had lost. She does not want to go back to her house in Provident Village. It's just too hard.