CCP pays tribute to Imelda Marcos in spite of protests 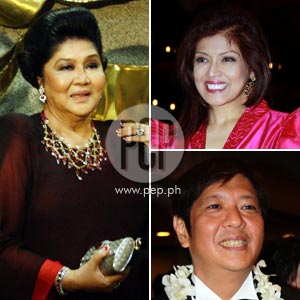 The Cultural Center of the Philippines founding Chair Mrs. Imelda Marcos (left frame) was recently given a tribute titled Seven Arts, One Imelda. The former First Lady was accompanied by her children Imee and Bongbong.

In spite of protests by party-list Bayan Muna, the Alliance of Concerned Teachers, and other groups, the Cultural Center of the Philippines (CCP) pushed through with its gala event Seven Arts, One Imelda last Friday, September 11.

The program featured nine of the most prominent Filipino singers and musicians, and a montage of the seven arts: music, dance, solo and choral singing, performance art, fashion and oratorio.

The musical extravaganza was staged in honor of the CCP's founding Chair, Imelda Romualdez Marcos. The former First Lady graced the formal event wearing a red and black dress, with her trademark butterfly sleeves accented by a diamond and ruby necklace.

PEP (Philippine Entertainment Portal) asked the widow of the late President Ferdinand Marcos how she felt about this tribute.

"Well, I am so happy that after all these years, the CCP is still producing so many great artists that we Filipinos can be proud of," said Imelda. "This sanctuary that we started to build 44 years ago, and was finished 40 years ago, has become a sanctuary for the Filipino soul, a monument to the Filipino spirit, and has really given life to the spirits of our people. And it is here where the good, true and beautiful has become real.

"And so I am very grateful to the artists. I'm very grateful to everybody for making this Cultural Center a sanctuary for the Filipino soul and spirit. Hopefully, what is beautiful in all of us, will also unite us, not only enrich us and give us a great future. I pray and hope that this future is here forever. And I know it will."

The former First Lady's response to the protests against her being honored by the CCP was typically complacent: "As you can see, beauty conquers everything. Because beauty is God. And God will always prevail."

Seven Arts, One Imelda was one of the highlights of the CCP's 40th anniversary celebration. According to the bulletin posted on the CCP website, the invitational gala event aimed to "extol the seven arts through signature pieces created during the period of Imelda's patronage."

The Board of Trustees of the CCP issued its own statement, saying that "the tribute to Mrs. Marcos will shine with original­ity, creativity and virtuosity, unmistakable trademarks that have set our presentations apart from the rest for four decades now. This is how we are as a people—gracious, generous, and compassionate. Ang pagkakaroon ng utang-na-loob ay bahagi ng ating kulturang Filipino. Hindi ito dapat haluan ng pulitika."

In his opening remarks that night, CCP vice president and artistic director Raul Sunico reiterated, "We want to give this tribute irrespective of political color. Let art and politics be separate."

The CCP was created in 1966 (during the term of Ferdinand Marcos) through Executive Order No. 30 to "promote and preserve Filipino arts and culture." Designed by National Artist Leandro Locsin, the CCP building along Roxas Boulevard was formally inaugurated on September 1969.


PROTEST ACTIONS. Concerned individuals and groups pointed out that Mrs. Marcos does not deserve the lavish tribute.

Before the invitational event took place that Friday night, around a dozen activists picketed the event and waved placards stating "Justice for the victims of the Marcos conjugal dictatorship." The protesters chanted, "Never again to Martial Law!" as rain poured down on them on the CCP's driveway.

The Alliance of Concerned Teachers declared that holding the tribute showed "utter disrespect for the Filipino people who are victims of martial law, especially the tens of thousands of victims of human rights violations, including those who died fighting the Marcos dictatorship and for whom justice remains denied to this day."

In a phone interview with a national broadsheet, Bayan Muna representative Satur Ocampo stressed that the tribute "would provide a false impression of ignoring the dark days of martial law. If we highlight [Imelda's] patronage of the arts, you will rehabilitate [the Marcoses'] image even with no admission from them of what they did."

In the second half of the program, Ilocos Norte Rep. Ferdinand "Bongbong" Marcos Jr. introduced a 28-minute presentation titled Imelda: Muse and Madness, which he said was "suitably Imeldific." He lavished praise on "close to 300 performers" some of whom " might even be too young to remember my mother but the others have worked with her and felt her influence."

After the program, PEP was also able to interview Imelda's daughter, Imee, to ask for her thoughts regarding the tribute given by CCP.

"Yeah, I think there's no question about the contribution she's made to the Philippine arts, no matter what the politics are."

Imee's reaction to those who were protesting this tribute: "There are? I didn't even notice. It's their right. Sure, no problem. The Cultural Center started with a lot of controversy, so we never expected it to go away."

Among those who graced the occasion were Tessie Tomas, who has impersonated Imelda Marcos in the past, and TV host Daphne Oseña.