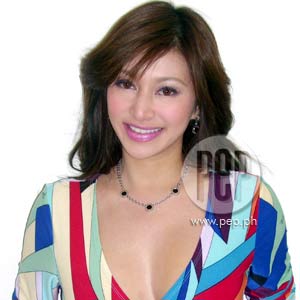 Rufa Mae Quinto rebuked Mo Twister for getting it wrong by tweeting that presidential son Mikey Arroyo was her secret fiance, but her engagement to still unnamed non-showbiz boyfriend keeps her smiling.

Comedienne and host Rufa Mae Quinto has been feeling a bit down lately because of a controversy instigated by fellow Showbiz Central host Mo Twister, who said in his Twitter account that she was having a relationship with presidential son Mikey Arroyo. Mo, of course, has since retracted the tweet and said that he had called her up to apologize. (Click here for the story.)

Rufa said she was not angry with Mo, but after all that has happened, she's now more reserved when she is around the DJ, meaning that there is probably no more chance for the two to ever become friends.

STRONGER, THANKS TO MYSTERY BOYFRIEND. Such a controversy would have proven too much for Rufa, but thanks to her mystery boyfriend, she's been able to bear it.

One other thing that makes Rufa happy right now is the glittering ring on her finger. This is the question: Is she engaged to her boyfriend?

Rufa shared no more beyond the fact that she was now engaged. She would reveal all at the right time and at the right place. For now, it is a private thing. To those who continue put down Rufa, this was all she had to (jokingly) say: