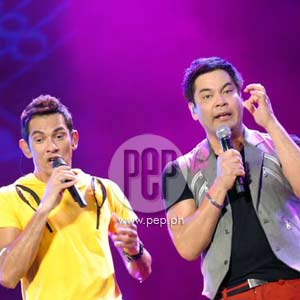 Gary Valenciano and Martin Nievera successfully pulled off their much anticipated concert titled AS 1 last night—September 19—at the SM Mall of Asia Concert Grounds in Pasay City. Louie Ocampo and Mon Faustino served as the show's musical directors.

Love for craft prevails even for the fiercest "rivals."

Mr. Pure Energy Gary Valenciano and Concert King Martin Nievera had proven time and again that their supposed rivalry had long been dead. Last night, September 19, at the Philippine premiere of their concert billed AS 1, the two topnotch performers shared the same stage at the SM Mall of Asia Concert Grounds in Pasay City and wowed their fans.

Once again, Gary and Martin showed why they still reign as two of the most enduring OPM figures despite the influx of young performers, some of whom have been making a name for themselves even in the international scene.

The mere sight of the two former rivals occupying the same platform was enough to leave the crowd cheering and screaming in delight. Known more as a balladeer, Martin's self-deprecating humor about his dancing skills kept the entire audience laughing throughout the evening.

First, he made an attempt to match Gary's lithe and fluid moves, he failed; but he managed to earn appreciative applause from the sold-out crowd.

Next, Martin tied a rope around Gary with the intention of completely preventing Mr. Pure Energy from moving around the stage. But the latter still managed to perform impressively, while belting out the OPM classic, "Di Na Natuto," to Martin's amazement and amusement.

QUALITY MUSIC AND ENTERTAINMENT. Despite all the hype concerning Gary and Martin's old rivalry, the concert—as Gary previously mentioned—was "all about the celebration of great music."

Both were given solo spot numbers, featuring their signature hits.

Martin belted out "Say That You Love Me," "You're My Everything," and "Be My Lady." He also gave his rendition of one of the Broadway gems, "All I Ask of You" (from the Phantom of the Opera), which mesmerized the huge audience. His performance of the showstopper "This is the Moment" served as one of the evening's best masterpieces.

Gary, on the other hand, jumpstarted his set with "Shout for Joy"—an upbeat praise song released in 1991. Then he slowed down with the inspiration classics, "Natutulog Ba Ang Diyos" and "Warrior is a Child."

Martin made fun of the fact that both he and Gary were never tapped to appear in any primetime drama series or movies.

"We are always asked to sing the theme song," mentioned Martin with a grin.

And with that, the two took turns in delivering the theme songs of some memorable primetime drama series, like, "Sana Maulit Muli," "You Are My Song," "Kahit Isang Saglit," among others.

Gary also sang Don McLean's love ballad, "And I Love You So," which was used in the recent film of Sam Milby and Bea Alonzo.

The huge crowd witnessed Martin and Gary acknowledge their mutual respect for each other.

Martin commended Gary for being a dedicated family man and a hard worker. Gary, on the other hand, praised Martin for his passion for his craft and resilience when it comes to facing life's challenges, saying, "He has gone through a lot."

Both artists also mentioned their desire to inspire people, and put aside whatever differences they have to work for a common goal. "We need it," Martin said, "especially now that it is the election season."

Buoyed up by the success of its Philippine debut, Martin and Gary will embark on a US-Canada tour to bring AS 1 to Filipinos living and working abroad. Here's their schedule: