Martin Nievera's condition is "nothing serious," according to concert publicist 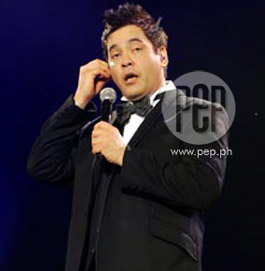 A day after he was confined at the Makati Medical Center, Martin Nievera is out of danger and reportedly "resting at home," according to AS 1 publicist Chuck Gomez. Martin suffered exhaustion and dehydration following his concert with Gary Valenciano held last night, September 19, at the SM Mall of Asia Concert Grounds.

The adrenalin rush was enough to sustain Martin Nievera until the last number before exhaustion and dehydration finally caught up with the Concert King backstage.

Martin was brought to the Makati Medical Center last night, September 19, after feeling dizzy at the conclusion of his much-anticipated concert with Gary Valenciano, dubbed AS 1. The sold-out event was staged at the SM Mall of Asia Concert Grounds.

In a phone conversation with AS 1 publicist Chuck Gomez, PEP (Philippine Entertainment Portal) learned that although they were alarmed when informed of the unfortunate incident, Martin's condition "was nothing serious" and that he was quickly pronounced out of danger by the attending doctors.

Gomez attributed Nievera's meltdown to fatigue made even worse by the erratic weather conditions.

"Hindi kasi kumain si Martin before the concert," revealed Gomez. "Nag-rehearse lang talaga agad siya kasi nga he wanted everything to be running smoothly even right before the show."

There was also nothing dramatic about the way the entire incident transpired.

According to Gomez, Martin was still able to talk to a few reporters on his way to the dressing room. Minutes later and while trying to cool off in preparation for a possible encore (reportedly consisting of an Earth, Wind and Fire medley), Martin felt dizzy and began to throw up. He went to the hospital "quietly."

"It was not as if he collapsed and had to be really rushed to the hospital," Gomez clarified. "Wala namang ganung drama."

HANDS-ON PERFORMER. The efforts invested by Valenciano and Nievera as well as the entire production team were backbreaking, to say the least, according to Gomez.

"He [Martin] and Gary were very hands-on with this project. They were on top of everything and they knew every details, even those na hindi na nila dapat concern."

The taxing preparations for the event combined with other stress-related factors can be too much for an individual to handle.

Despite the incident, Gomez assured the public that the planned U.S.-Canada tour of AS 1 will push through as previously announced.

Martin and Gary's U.S.-Canada tour will bring AS 1 to the Filipino communities stationed abroad.