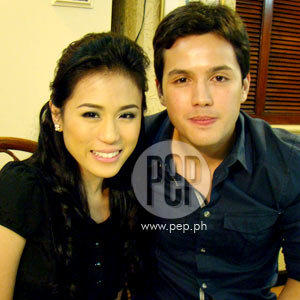 For the second time, Toni Gonzaga was able to work with her director-boyfriend Paul Soriano in the indie film titled A Journey Home. The singer-actress was first directed by the grandson of the late Nestor de Villa's in her music video "Catch Me I'm Fallin'."

A Journey Home is the first indie film of both Toni and Paul.

Before anyone can speculate, Toni explains that it was just a coincidence that she and Paul were chosen to be part of the movie. "Nagkataon lang," she told the media during the press conference of A Journey Home last September 19 at Dulcinea on Tomas Morato, Quezon City.

Was there any awkward moment during the shooting of the film?

The 25-year-old actress replied, "Honestly, walang ilang factor, wala ring weird factor. Like what I said kanina, we go to the set, we get into our characters, and we play our roles. Talagang lahat kami, we work as a team."

She also pointed out that she and Paul separate their personal lives from their respective jobs as actress and director. She elaborated, "Si Paul naman po ay hindi ko ka-loveteam. So, hindi po namin kailangang magpa-sweet, hindi naman po kailangan 'yon sa pelikula. You can ask the people around who we worked with, 'yong crew and staff. We see to it na may distance kami—I stayed with the cast in the dressing room. Siya naman, he prefers to stay with the crew para talagang ma-separate 'yong work sa totoong buhay."

The Entertainment Live! host also said that through this movie project, she saw how meticulous her boyfriend is in directing.

She also gave credit to Direk Paul for helping her in portraying a mother role in the film.

FROM ROM-COM TO DRAMA. Toni is known for playing funny characters in her hit movies like, You Got Me (2007), My Big Love (2008), and My Only You (2008). In A Journey Home, Toni attempts to play a more serious role by portraying the character of Gayle, a loving wife to Joem Bascon's character.

The shift from romantic comedy to full time drama was hard, according to Toni.

A Journey Home is a film produced by Jubilee Evangelical Church in commemoration of the 10th anniversary of Youth for Christ Ministry. It will have its one-day-only screening on October 3 at SM Megamall Cinemas 8, 9, and 10.