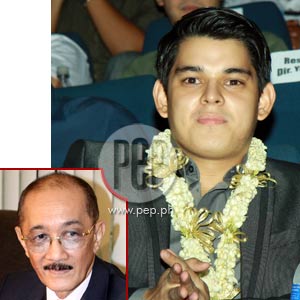 Towards the end of the press conference, Atty. Firdausi Y.I. Abbas, Lorayne Pardo's legal counsel, gave Richard Gutierrez some advice. "Alam mo, actually, we sympathize with Richard. We know that he didn't want it to happen. Maybe he should get another... never mind, bata pa yun!" he said.

Last Wednesday, September 23, the entertainment press interviewed Richard Gutierrez during the premiere night of Echo, the Hollywood film adaptation of Sigaw, a horror movie he starred in last 2004. Among the questions posed was his opinion on the Reckless Imprudence Resulting in Homicide case filed against him by the Cavite Prosecutor's Office last September 18.

The case was filed before the Municipal Trial Court in Silang, Cavite almost two months after Lorayne Pardo filed a formal complaint against Richard, in connection with the death of her spouse Nomar Pardo last May 22 when the car Richard was driving met an accident.

According to the actor, what the public needs to understand is that he's ready to face the court since it was not his intention to kill Nomar.

The actor added that his camp did their best to prevent the case from reaching the courts:

"We tried our best to talk to them, to settle things, pero ayaw talaga nila eh, so wala akong magagawa."

"HE SHOULD BE MORE ATTENTIVE". At the Abbas Law Firm's press conference on Thursday morning, September 24, in Greenhills, San Juan, Atty. Firdausi I.Y. Abbas, legal counsel for Lorayne Pardo, implied that this statement by the actor shows his ignorance of the case against him.

The lawyer said Richard does not know he may be sentenced guilty by the courts even if he did not have the "criminal intent" and "malice" to cause the death of his personal assistant.

Article 365 of the Revised Penal Code states that "any person who, by simple imprudence or negligence, shall commit an act which would otherwise constitute a grave felony, shall suffer the penalty of arresto mayor in its medium and maximum periods."

The issue in this case, he added, was Richard's "reckless driving," not "criminal intent."

Atty. Abbas added that it is time for Richard to focus on his case, and start talking to his lawyers.

ANNABEL'S MESSAGES. Atty. Abbas also answered Richard's statement about the case reaching the courts because Lorayne's camp did not agree to an amicable settlement. The lawyer said an amicable settlement could have been agreed upon had Annabel Rama, Richard's mother, continued with their previous "lump sum" agreement, and had she not sent Lorayne "hurtful" text messages. (Click here to read related story)

"So at that point, hindi na siya pumayag. Na no matter how much will be offered to her she will not accept it. Ito paubaya niya na lang sa batas, sa husgado," he said.

Through her message, Annabel was mocking not just Lorayne, but also the Philippine judicial system, added the lawyer.

"Si Lorayne is still open to amicable settlement. Provided na aside from whatever na monetary compensation na mapag-usapan, they [Lorayne's camp] want two other things. They want Richard to apologize publicly to her for what happened. And the mother, Annabel Rama Gutierrez, to apologize to her for all these badmouthing she did. Those three must be done simultaneously and together. Perhaps she'll agree an amicable settlement," Atty. Abbas explained.

Atty. Abbas also responded to reports that the case is part of an effort to destroy Richard's character.

The Municipal Trial Court in Silang, Cavite still has to release the schedule for the next arraignment, where Atty. Abbas expects Richard's lawyers to file a petition for review.