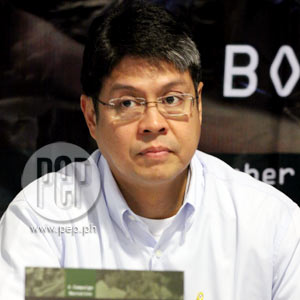 Senator Francis "Kiko" Pangilinan says he's willing to explore all avenues of technology to raise support for the Noynoy Aquino-Mar Roxas campaign in the 2010 elections.

Senator Francis "Kiko" Pangilinan was one of the earliest politicians to bare to the public his plans for the 2010 elections. Now he is the earliest to announce plans to back out—with good reason.

Last May, Pangilinan's wife, Megastar Sharon Cuneta, said in an interview that her husband was seeking a vice-presidential seat. But last Sept. 20, the first senator to win as an independent candidate announced that he was stepping out of the race to support the campaign of presidential tandem Sen. Noynoy Aquino and Sen. Mar Roxas, his co-members in the Liberal Party.

PEP (Philippine Entertainment Portal) had a chance to talk to Sen. Pangilinan last Friday, Sept. 25, during the launch of the book INDIE, at Fully Booked, Bonifacio High Street in Taguig City. He said he still does not have a designated role for the upcoming electoral campaign, but presidential aspirant Sen. Aquino is asking him to form socio-civic groups for the campaign.

Sen. Pangilinan said these groups will be able to extend all kinds of support to Sen. Aquino's campaign, including raising funds.

"Kasama rin 'yan. Dahil ang commitment natin is for them, to raise support, including being able to raise funds," Sen. Pangilinan said.

Political experts estimate that a candidate for a national post should have at least three billion pesos (P3,ooo,ooo,ooo) to successfully launch a national campaign and have a chance of winning.

Sen. Pangilinan said he is also raising funds through his own initiative. A percentage of the sales of the book INDIE, which chronicles his successful 2007 independent senatorial campaign, will go to the PINOY (Pilipinas Para Kay Noynoy) initiative.

The senator hopes every Filipino who buys and reads INDIE, authored by Palanca winner Celeste Flores-Coscolluela, will pick up much-needed political inspiration.

If he calls the 2007 campaign "going to hell-and-back," he wants next year's campaign to be a symbol of unity. His senatorial term does not expire until the year 2013, and continuing with his VP bid would create a rift in the Aquino-Roxas bid.