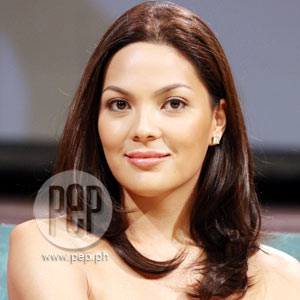 "Just drove through the floods in Pasig. I know a lot of us feel restless and helpless at this point," actress-model KC Concepcion said in a text message to friends. "But that should change right coz we can help!" The daughter of Megastar Sharon Cuneta and 80's ex-matinee idol Gabby Concepcion spearheads a relief operation today, September 28, to help the victims of typhoon Ondoy. To all PEPsters, we are launching a donation drive pr

The initiative of one has become a group effort with massive results.

But in her text update sent at around 8:00 p.m., she related: "Our team got stuck in Marikina, more ppl showed up than expected. 52 ppl died in this area :-( They are rowdy but happy to see some food."

They were supposed to head to Cainta, Rizal, but decided to postpone it for tomorrow. More donations would mean more beneficiaries, so she's encouraging people to "drop off their donations at the Wackwack Clubhouse tomorrow, between 10:00 a.m. to 4:00 p.m."

She won't be there due to her taping for Lovers in Paris, but she assures donors, "there will be youth volunteers."

EARLIER UPDATES. As of 5:00 p.m.: "We estimated to produce 400 bags on average for each stop. If we all put in one drop of water, we could all make an ocean."

She added, "Busy si direk Joyce Bernal sa pag-pack ng bigas, at salamat sa Max's. We are now loading cooked food! Niluluto na rin ang hard-boiled egg (hwaw!). Loading goods now. Yahoo, we are moving fast—thanks to all our families and friends. In a larger scale, hats off to Bayo which sent more clothes (including Bayo for Kids) thru ABS-CBN, L'oreal for their huge financial donation also thru ABS."

As early as 2:35 p.m., KC was already overwhelmed by the support she was getting. Her text message enthused, "The goods are pouring in! Thank you so much to our friends who have sent all relief goods they could give. We are still accepting!!!"

Model-actress KC Concepcion had called on her friends and the public to join in her efforts to extend a helping hand to those devastated by typhoon Ondoy during the weekend.

PEP received a copy of the text message disseminated by the Lovers in Paris lead star earlier this morning, and mentioned witnessing firsthand the aftermath of the calamity in Pasig City—one of the heavily affected areas, along with Manila, Marikina, and Rizal.

"My friends and I are collecting, packing, distributing any relief goods you can donate (old clothes, canned goods, slippers, cooked food, pillows and blankets)," the text message of the daughter of Megastar Sharon Cuneta said.

She continued: "Please do give what you can, drop off your goods at the Wack Wack Clubhouse. Anytime between 11:00 a.m. to 4:00 p.m. We will be packing rice, etc. there tomorrow and should start distributing to an evacuation center (to be announced) by 4:00 p.m."

The Wack Wack Clubhouse is located inside the Wack Wack Golf and Country Club at Shaw Blvd. in Mandaluyong City.

KC, who is currently serving as United Nations Ambassador against Hunger, ended her message with vibrant optimism, saying, "Let's collect all the good vibes for tomorrow."

If you know other people who are currently spearheading or supporting a donation drive, and who are needing help, let's publish their stories and requests. Email nicole.bulatao@pep.ph.