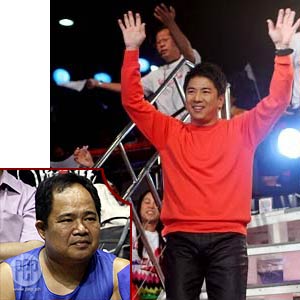 Wowowee host Willie Revillame personally visited the typhoon-ravaged areas of Cainta, Marikina, and Tatalon in Quezon City yesterday, September 27, to hand out relief goods to families displaced by tropical storm Ondoy. Willie also extended help to comedian Bentong (inset). To all PEPsters, we are launching a donation drive project for the victims of Ondoy. If you wish to give in-kind donations, we listed down various drop-off poi

Aboard a chopper, Willie surveyed the affected areas of Cainta, Marikina, and Tatalon in Quezon City and gave out relief goods to hundreds of families displaced by the typhoon.

The mission was buffeted by strong winds, making it difficult for some victims to catch the grocery bags. Hungry and in dire need of help, the affected families reportedly scrambled to grab hold of the goods, which was a perilous move, given that the host was handing out the aid while aboard the chopper. This prompted Revillame to say later, "Hindi po madali."

Willie advised people who plan to follow his lead to avoid giving canned and bottled goods so as not to add to the danger that the victims face. That is, these items can hit and cut the skin or do worse when dropped from a high altitude.

Aside from the actual relief efforts, Willie donated P1-million to ABS-CBN Sagip-Kapamilya Foundation to further boost the charity campaign for the victims of Ondoy.

LOST FOR WORDS. Willie was also able to interview one of the typhoon victims identified as Eric, whose house was carried away and destroyed by violent flood waters.

The ABS-CBN news crew captured in video the actual scene showing Eric's children being washed away by the strong current. Authorities are still searching for Eric's two kids and wife.

ASSISTING BENTONG. One of those directly affected by the tragedy was comedian Bentong, who reportedly lost valuable possessions and was left homeless because of the heavy flood.

Fortunately, a neighbor offered his place for Bentong to stay in while waiting for Ondoy to exit the country.

Willie, who personally thanked Bentong's neighbor for the good deed, assured the popular sidekick of assistance.

Willie and Bentong worked together in the defunct ABS-CBN noontime show, MTB. Bentong was later reunited with Willie when the latter was asked by the network to host his own program, Wowowee.