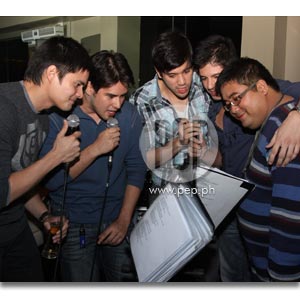 Perry Lansigan's (right) birthday celebration turned out to be a jamming session with his close friends and talents. In this photo, (From left) Dingdong Dantes, Gabby Eigenmann, Carlo Gonzales, and Arthur Solinap sing with their talent manager, who recently launched his own management and events company called PPL Entertainment.

Everyone jammed with TV executive Perry Lansigan as he celebrated his birthday in advance at Celsius Bar on Scout Rallos, Quezon City, last night, October 12.

The TV executive and talent manager, whose birthday falls on October 15, was first greeted with his talents Gabby Eigenmann with cousin Ryan Eigenmann, Arthur Solinap, Carlo Gonzales, and Angelika dela Cruz. They were already eating and drinking booze with friends when PEP (Philippine Entertainment Portal) arrived at the private party.

Moments later, just before Rosalinda aired on television, its lead actors Carla Abellana and Perry's talent Geoff Eigenmann arrived to join the group in celebrating one of the most important days in their manager's life.

While enjoying the Thai inspired buffet dinner, the guests were entertained by former Pinoy Idol hopefuls Jeni Rowell, whose experience as a lounge singer was reflected in her rendition of classic songs; and Kid Camaya, who turned pop music into acoustic versions.

Perry's most popular talent today, Dingdong Dantes, arrived just when everybody was in the mood to party and jam endlessly with Kid's band called Soulfools. Later on, the celebrator was also surprised to see Jolina Magdangal who came with her rumored boyfriend, Rivermaya band member Mark Escueta.

JAMMING ALL NIGHT. In the middle of the night, while Kid and Jeni were on break, the guests took the microphone and dedicated songs to the birthday boy.

Dingdong gathered enough confidence after chugging down one bottle of beer and sang Eraserhead's "Huling El Bimbo." The Stairway to Heaven actor changed the lyrics towards the end of the song to make it relate a bit to Perry, "At pagkagaling sa GMA didiretso na sa PPL's office."

Then, Dingdong passed the mic on to his cousin Carlo, who is also Perry's talent. He chose to sing John Mayer's "Your Body is a Wonderland," but before singing he jokingly told the audience, "O, record niyo 'to para magka-project ako sa GMA records."

After this, he called the attention of Arthur Solinap, who was seated beside his lady love Rochelle Pangilinan, and said, "Ito na ang pagkakataon mong magpakitang-gilas. Kumanta ka ng 'Harana.'" Arthur got teased by everyone as he walked to the microphone. The former Marimar star didn't know the song, so Gabby stayed with him and whispered to him the lyrics as he sang Parokya ni Edgar's hit song "Harana."

Aside from Perry's talents, the former contestants of the defunct talent-search show Are You The Next Big Star—Alex Santos, Camille Cortez, Geoff Taylor, Greggy Santos, Frencheska Farr, Jay Perillo, and Zyrene Parsad—each performed a song for their former executive producer.

Popular choreographer Geleen Eugenio and TV personality Wilma Doesn't also jammed with the guests by singing The Carpenters' "Close to You" and Up Dharma Down's "Oo."

The energy was still up even when the party came close to an end. Richard Gomez, who came in late to be with his wife Lucy Torres-Gomez, still managed to play a part in the jamming session by singing America's song "All My Life."

Jolina was hesitant when she was first invited to sing. But when Gabby pointed out that her companion Mark Escueta was already playing the cahon, she stood up, took the mic and sang with her soon-to-be-siblings with Perry. She told PEP that her father already talked to the PPL Entertainment president about signing a contract with his management and events company.

The party ended with Soulfools's acoustic versions of party music including Earth, Wind, and Fire's "September."

PEP was able to get a message from Dingdong for his talent manager before the party was over. He said, "Sa aking pinakamatalik na kaibigan sa industriya na nag-evolve sa mas malaking pagtitiwala hindi lang sa pagkakaibigan kundi pati na sa buhay... Natutuwa ako dahil as I grow, as he grows, we both grew together. I will forever keep all the memories with me, everything. There's only one reason why I'm alive, why I'm still here [in showbiz] is because of him. Happy birthday, I love you, Perry!"