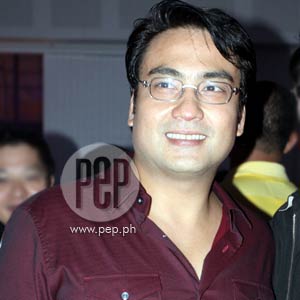 Sen. Bong Revilla said although he had migraine attacks while his birthday party was starting, he was happy because his guests braved strong rains just to attend the affair.

"I wish this time Lani will make it."

Action star Bong Revilla is one of the few personalities from showbiz who successfully entered politics. He made his name playing the hero in more than 40 action movies from the '70s to the '90s. He first entered politics when he won as the vice-governor of Cavite in 1995. Since then, Bong held positions as Governor of Cavite, Chairman of the Videogram Regulatory Board (now Optical Media Board), and Senator.

Several other relatives of Revilla are also in politics, like his dad, former Senator Ramon Revilla Sr., and his brother Strike Revilla, incumbent Mayor of Bacoor.

Bong's wife, Lani Mercado, is now eyeing her own political post. The actress will be running for a congressional seat in Bacoor, Cavite next year.

Lani previously lost when she ran for mayor of the same town in 2001, allegedly because of massive cheating.

Sen. Bong acts as Lani's mentor to help her carve her own name in the political sphere. He said he's giving Lani "all-out support."

Bong said he'll also be running as a reelectionist senator next year. During the birthday party, guests were given square-shaped fans bearing a list of the senator's accomplishments at the back. In front was Bong's picture, and the words 'Sen. Bong Revilla' and '2010'.

ANG PANDAY. Sen. Bong Revilla is also starring in a new movie, Ang Panday, based on a popular komiks series. The script was written by Carlo J. Caparas, and the illustrations drawn by Steve Gan.

The "Panday" role was popularized by the late king of Philippine movies, Fernando Poe Jr.

Because Bong's movie will be screened in December, a month after the Senator would have filed his candidacy, there are questions whether the Commission on Elections (Comelec) will allow the movie to be shown as it might mean early campaigning.

But Bong said Comelec said yes to the movie even before he had started shooting it.